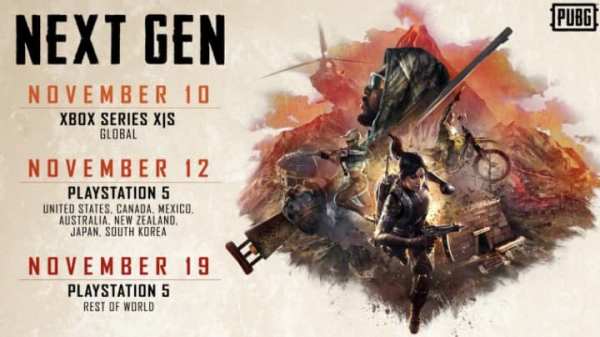 The official page of PUBG, PUBG Support, has posted a tweet announcing that PUBG will be playable at the launch on PlayStation 5 and Xbox Series X/ Series S. The game will be available once the consoles are launched.

[Console] We officially confirm that PUBG will be playable at launch on the Xbox Series X/Series S and PS5 consoles.

Check out the link below with all the details:https://t.co/d7myvblcs1

According to the blogpost of PUBG, PlayStation 5 will be receiving the game on November 12 in few countries like the U.S, Canada, Mexico, Japan, South Korea, Australia, and New Zealand. For all other PS5 players in other countries, the game will be releasing on November 19.

The Players of Xbox Series X and S will get the PUBG game on November 10. One of the best things is, you can use the same PUBG account which you have been using for so long.

Along with the October 9.1 update, PUBG is also added to the consoles like PlayStation 4 Pro and Xbox One X versions of the game. And when the new consoles PS5 and Xbox Series are launched in November, even those users can play the game.

All the players of PlayStation 4, Xbox One, Xbox Series X, and S, PS5 players can team up and play PUBG against each other.

The Official website of PUBG said that all the players who already have the game on current-gen consoles would not have to purchase the game for next-gen. In the Xbox Series X and PS5, all the players have to upgrade to the new versions for free.

With that, the game progress of the player will be carried forward to the latest versions, like skins, emotes, rank, and more.

On talking about performance, the PUBG Battle Royale Game will run at 60 FPS on PS5 and Xbox Series X. And the Xbox Series S will support up to 30 FPS; later, it will be improved. The game will use a “Framerate Priority” option to gain 60 FPS gaming.

It is exciting to know that PUBG Community will be playing the game on the next-gen consoles from November, once the consoles are launched.

So, guys, are you excited about the PUBG game coming to PS5 and Xbox Series? Share your views with us by commenting in the comment section below.