The American multinational semiconductor and telecommunications equipment company, well-known as Qualcomm has filed a lawsuit against the tech giant Apple and has recently received two bad news, as it loses two key decisions in the dispute with Apple.

Contents show
Qualcomm Loses Two Key Decisions In The Dispute With Apple
But what originated this conflict?
First court decisions favorable to Apple
Qualcomm’s priority is to weaken Apple
Apple wants to “get rid” of Qualcomm
Qualcomm’s Gigabit LTE is a “smoke curtain”

Qualcomm Loses Two Key Decisions In The Dispute With Apple

Qualcomm has filed a lawsuit against the tech giant Apple and has received two bad news. First, it was unable to force partners making Apple products to make royalty payments before determining the full value of those same royalties that are in dispute, and secondly, lost an effort to stop Apple from pursuing antitrust cases against Apple.

The iron arm will continue, for now, the tech giant Apple seems to have some advantage, but Qualcomm has some obstacles.

The tech giant Apple and Qualcomm have a complex relationship, this is because Apple does not directly license the Qualcomm patents involved in this case. Instead, the Cupertino company hires manufacturing companies such as Foxconn, Pegatron, Wistron and Compal, which in turn pay licenses to Qualcomm for the manufacture of iPhones and iPads. Therefore, the tech giant Apple indirectly pays these rights as part of the costs involved in manufacturing the equipment.

However, Apple and Qualcomm have a contract that specifies that Qualcomm will reimburse Apple for royalties to pay off, as noted in court and published in the filing notes that Florian Mueller of FOSSpatents submitted as documentation. 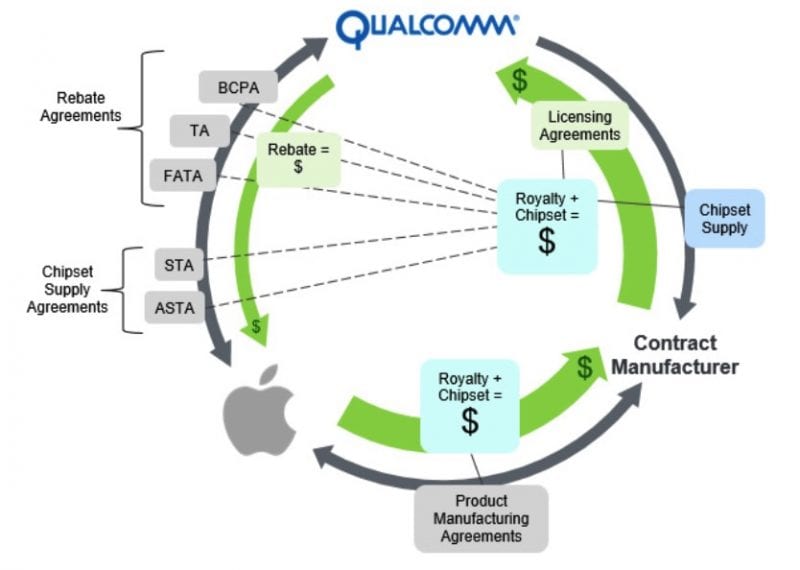 But what originated this conflict?

In September 2016, Qualcomm stopped making these rebates on the tech giant Apple’s payments, a move Apple claims to be in retaliation for its cooperation with a South Korean antitrust investigation of Qualcomm’s business practices.

Apple then instructed its device manufacturing partners to stop making royalty payments to Qualcomm until the case was settled. Qualcomm has responded with a lawsuit against manufacturers that it has violated its contracts.

In August, Qualcomm filed a motion to force Apple device manufacturing partners to continue to make intellectual property royalties payments while those royalties were being litigated.

Judge Gonzalo P. Curiel of the US District Court for the Southern District of California is charged with setting the FRAND royalty rates for Qualcomm’s patents. But today, this judge issued a ruling denying Qualcomm’s offer for a preliminary injunction that would force manufacturers to make royalty payments.

The judge also denied Qualcomm’s motion for an anti-action injunction designed to stop Apple’s parallel proceedings in other jurisdictions.

Qualcomm preferred that a local San Diego court determine a global royalty rate covering all its “standard-essential” patents. Apple, in turn, preferred Qualcomm to have the burden of proof in the infringement demonstration and also to face patent invalidity scrutiny in each jurisdiction, including China, Japan, Taiwan and the United Kingdom.

Qualcomm’s priority is to weaken Apple

Having lost both of its injunctions, Qualcomm is encouraged to work quickly to resolve the issue of what royalties are owed by partners contracted to manufacture Apple devices before any money can be paid from iPhones sales. And at the same time, it faces the prospect of repeatedly combating Apple in all jurisdictions where they have misunderstandings (with other players) and potentially lose patent rights that they can not prove to be infringed on, or Apple can prove to be invalid.

Apple wants to “get rid” of Qualcomm

Apple is increasingly developing its own components that constrain Qualcomm’s components in computing performance while joining with Intel to get rid of Qualcomm’s modems. In addition, Apple is also attacking Qualcomm’s best engineering talent in an apparent attempt to build its own mobile chips, as well as developing its own GPU and ISP (Image Signal Processor) architecture of the camera.

It seems that this nuisance is working, so much so that Qualcomm, in response, tried to create a narrative in the media (being published even in its official page), where it accuses Apple of using technologies that have already been placed in other equipment under the control of Qualcomm, starting from the idea that the new iPhone 8 of the company and the iPhone X cannot support the Gigabit LTE of Qualcomm. 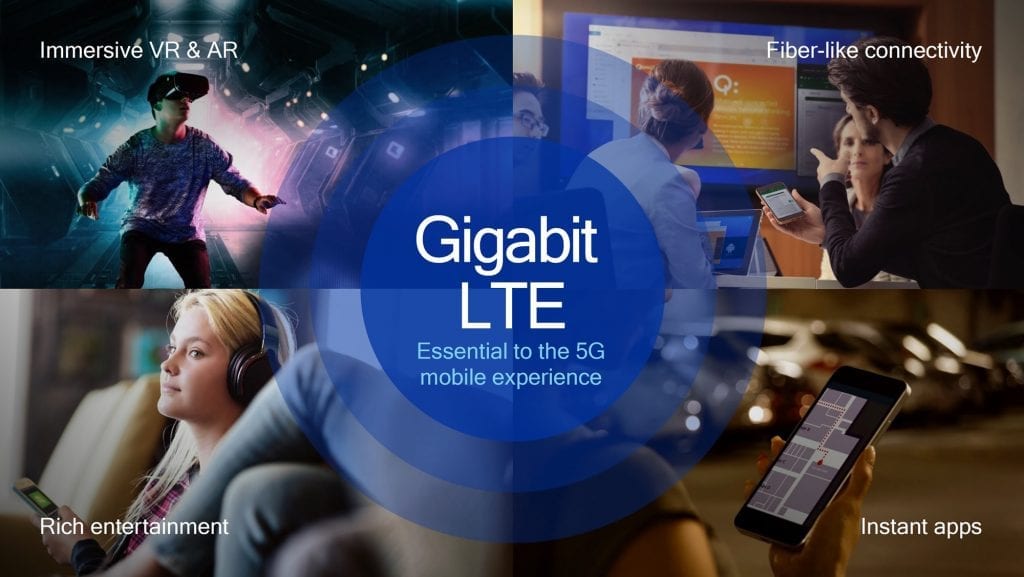 However, the iPhone 6s and Apple iPhone 7 on the market already support LTE Advanced, with theoretical data transmission values of 300 to 450Mbps. Today, operators around the world still do not fully realize that, let alone the super-technology that Qualcomm has, the LTE Gbps that guarantees two to three times the speed.

In fact, the OpenSignal report notes that this year the top US carriers only achieved average LTE download speeds of less than 17Mbps, while the overall LTE download average was only 17.4Mbps.

While Gbps networks are slowly being deployed, the reality is that very fast mobile data rates require the use of a wider spectrum. Although the technology offers a great demonstration and confers bragging rights on operators who claimed to implement it first, the spectrum will continue to be allocated to allow for more users but at lower rates.

New Gigabit LTE technologies can achieve speeds of up to 1 Gbps in simulations and controlled environments. In the real world, however, speeds must be close to 100-300 Mbps. This does not confer any disadvantage to those who offer technology other than Gigabit LTE.