We all know that the battle between the tech giant Apple and Qualcomm is far from over. Now, it has been Qualcomm who has countered Apple, and the chipmaker has asked the US government to prevent the arrival of iPhones to the country, as well as prohibit the sale of those already in the country.

Qualcomm Seeks To BAN Imports And Sales Of Apple iPhones

Contents show
Qualcomm to attack Apple: Wants to ban the sale of its devices in the United States
Qualcomm plays a very important role in the industry because of its large number of patents

Qualcomm to attack Apple: Wants to ban the sale of its devices in the United States

Now, it has been Qualcomm who has countered Apple, and the chipmaker has asked the US government to prevent the arrival of iPhones to the country, as well as prohibit the sale of those already in the country, along with the elimination of Marketing campaigns. According to Qualcomm, not being paid Apple, those of Cupertino would be violating six patents that have to do with extending the battery life of their mobile phones.

To prove this, Qualcomm has even created an infographic in which shows the patents that Apple is violating. Qualcomm has focused on these six, even though, as say, the iPhone uses thousands of patents the company, covering fields such as streaming media, interaction networks, basic communications and improved performance. 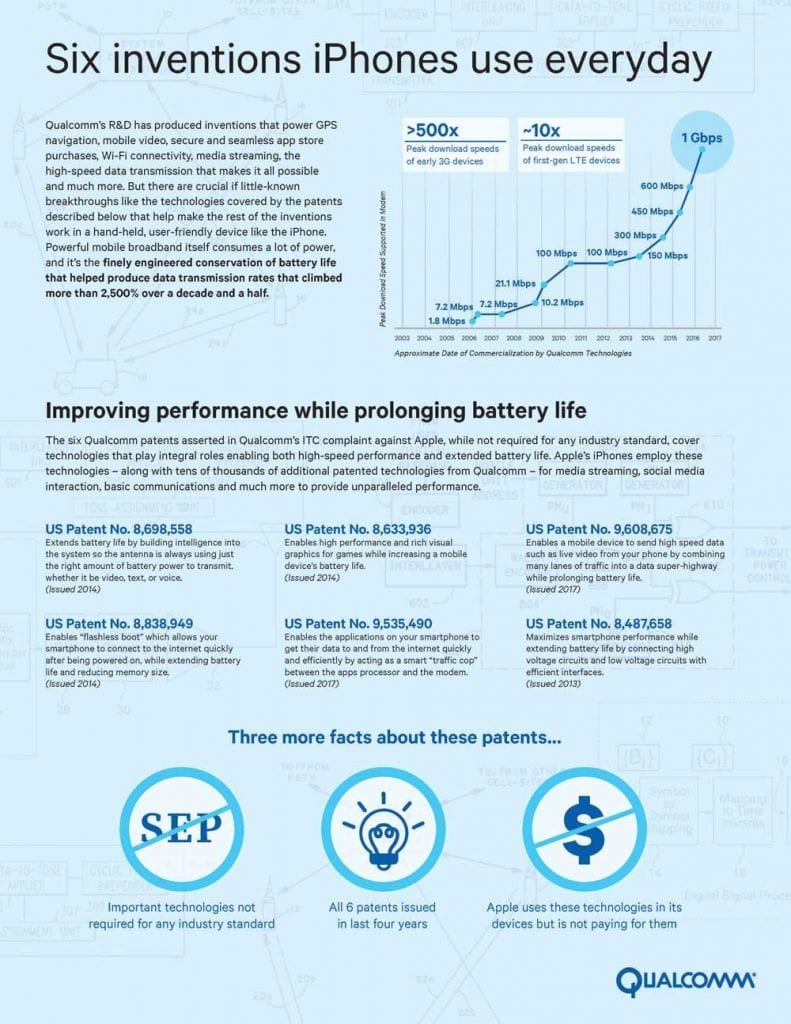 The complaint has been filed with the United States International Trade Commission and the California District Court, where both companies are accused of even more things. This is, therefore, a new chapter in a process that began earlier this year with the US FTC accusing Qualcomm of anti-competitive practices in selling LTE smartphone modems.

Apple took advantage of this situation and filed its own complaint alleging similar practices towards the companies that manufacture its products, claiming that the chip company would charge very high fees for the use of its patents and was abusing its leading position in this sector. Apple decided to force its manufacturers, not paying those who worked with Qualcomm.

If a company wants to sell mobile phones in the market, it is obliged to have an agreement with Qualcomm, because its technology is present in all our mobiles. The problem is that many of these patents are considered as standard in the industry, so they have to be offered to manufacturers at a reduced and fair price.

We will see what all this is, in a battle that is far from over, and that could do much harm to both companies. Legal proceedings could take years. Therefore, it is unlikely that this case will affect the iPhone 8, which will be launched in early September. The first trials of the case will take place in early 2019, and court orders take a year and a half to take effect after a final decision is made on the case.

So, what do you think about this lawsuit? Simply share your views and thoughts in the comment section below.