After the severe well-known WannaCry and Petya ransomware that have put thousands of computers in check worldwide, the mobile phones are not free and safe, as recently, a new ransomware is discovered that will expose all your browsing history and other sensitive data.

WARNING! This Ransomware Will Expose Your Browsing History & Sensitive Data

At the moment, after the recent global cyber attacks carried out by the severe and dangerous ransomware like WannaCry and Petya or NotPetya, the cyber threat that most worries users are ransomware. Computers are not the only devices that have to fear this kind of malware, as mobile phones are also vulnerable and can be easily infected.

Now, a team of researchers at security firm McAfee has detected a new ransomware for Android hidden in Google Play Store apps. The malware has been named “LeakerLocker” and experts have found samples in two fake applications from the official operating system store.

One of them is called Wallpapers Blur HD, a tool to change the background in Android, and the other is Booster & Cleaner Pro, an app to clean the memory of the device. Fortunately, the tech giant Google has already eliminated them from the Google Play Store, but before being deleted they have accumulated between 5,000 and 10,000 downloads and between 1,000 and 5,000 downloads, respectively. 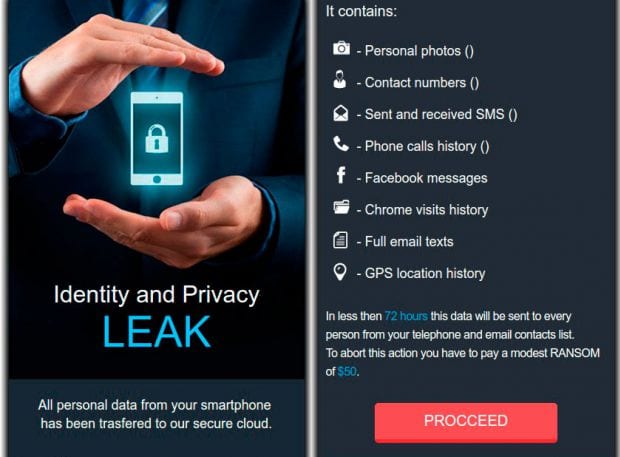 According to comments posted by the users on the tabs of each application, in most cases, they were downloaded as part of an incentive program that pays money in exchange for installing apps, a practice that we have already warned Which is dangerous and may end up infecting your mobile phone with severe malware.

McAfee researchers who have analyzed the two applications point out that Android ransomware LeakerLocker is not based on any exploit of the operating system, but only uses the permissions that the users grant to it when installing them.

Once it has infected your smartphone, ransomware is able to access private information, such as email address, contacts, browsing history and calls or text messages, among other data, and send them to a C & C server Controlled by the attackers.

When activated, LeakerLocker locks the screen to request the payment of the rescue but does not encrypt the files, but simply the victim can not use the device until the victim pays the amount of $ 50 with a credit card as a ransom.

So, what do you think about this ransomware? Simply share your views and thoughts in the comment section below.