Samsung to hold the company’s second launch event of the year. Recently, the company has launched the Galaxy S22 flagship series. In the upcoming event, the new Galaxy A-series smartphones are expected.

A new Awesome Galaxy Event will take place on March 17. However, this is not announced officially; tipster Evan Blass claims that the event will be live-streamed on the official website of Samsung.

At this event, the South Korean tech giant is expected to launch Galaxy A53 5G and Galaxy A73 5G smartphones. 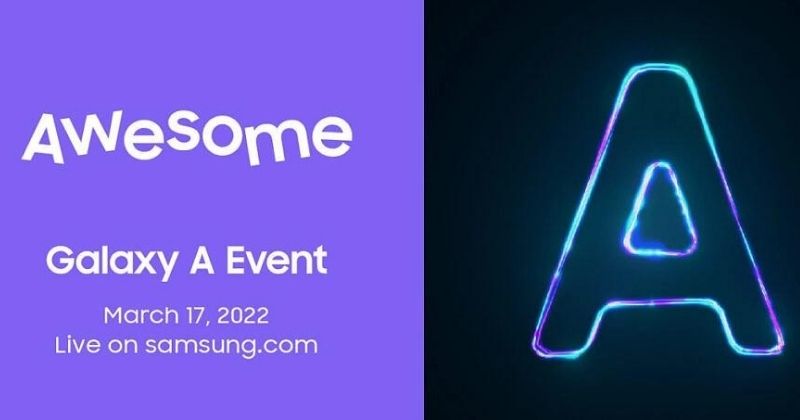 According to the tipster, Evan Blass, the Galaxy Awesome Unpacked event is on March 17. He has posted a tweet with images that show the company will launch A-series devices.

As Samsung has not announced it officially, the tipster shows this line up with the last year’s Galaxy Unpacked event that launched Galaxy A52 and Galaxy A72 on March 17, 2021.

Expected Specifications of Galaxy A73 5G, Galaxy A53 5G

Both the devices have a 120Hz refresh rate display. Samsung A73 5G is powered by Qualcomm Snapdragon 750G SoC. The A53 device will get Exynos 1200 SoC.

While A53 will have a 64MP primary sensory sensor, 12 MP secondary sensor, and two 5MP sensors. Both the smartphones are said to have 5,000mAh batteries with 25W fast charging.

Expected Specifications of Galaxy A33 5G, Galaxy A23 5G

These smartphones are said to run Android 11 out-of-the-box. A33 will have a 6.4-inch AMOLED display, and A23 will get a 6.6-inch IPS display. Both the devices have a refresh rate of 90Hz displays.