We all know very well that the South Korean giant Samsung’s flagship smartphone, of course, Galaxy S10 and Galaxy S10 Plus are the most powerful smartphones of Samsung to date and the most popular. Still, now there is another smartphone from the Koreans that will be presented soon with a rotating camera.

Although the South Korean giant Samsung’s flagship smartphone, of course, Galaxy S10 and Galaxy S10 Plus are the most powerful smartphones of Samsung to date and the most popular, there is a smartphone from the Koreans that will be presented soon and will absorb all the attention.

Yes, we are talking about the new Galaxy A90, a smartphone whose main novelty is its rotating camera that functions as a rear and front camera. Its launch is scheduled for April 10, but before that, they have just filtered all its technical specifications in full.

Also Read: 7 Best Selfie Mobile Phones Which You Can Buy

It has been on the Chinese social network Weibo, where the full technical specifications of the Galaxy A90 have been revealed. The device will have a screen of 6.7-inch, the same size as the Galaxy A70 features.

In this case, it will not have a notch on the screen, and its panel has AMOLED technology and a resolution of 2400 x 1080 pixels. It also specified that it will have a Snapdragon 7150 processor with eight cores and be clocked at 2.2GHz. Currently, neither its RAM nor the possible internal storage has been specified. 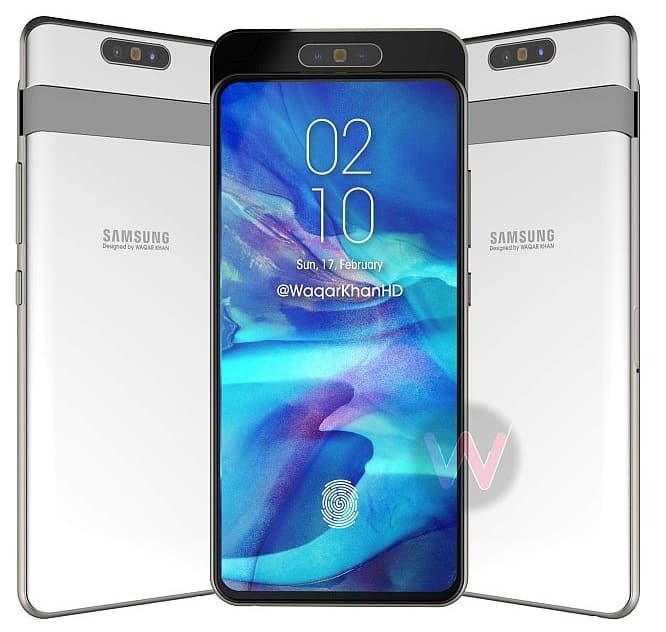 Moreover, the smartphone, of course, Samsung Galaxy A90, will come with three rear cameras, with a primary sensor of 48MP and f/2.0 aperture, another 8MP with f/2.4 aperture, and a third sensor ToF.

Filtration confirms the rotating design of these cameras so that the same sensors can work as a front camera so that we could be facing the best selfie smartphone in the entire Android universe. However, this is saying a lot for now, and we will have to see what the device is capable of.

This all-new Samsung Galaxy A90 also supports a fast charge of 25W according to the same source, and its dimensions are 76.5 x 165 x 9mm, and weighsigh about 219 grams.

While right now we do not know the reason for so much “weight” but it could mean that it will mount a battery of generous dimensions and numerous “milliamps” and to get out of doubt we will have to wait until next April 10, the date in which the South Korean giant Samsung has scheduled the presentation of the new Galaxy A series. So, what do you think about this? Share all your views and thoughts in the comment section below. And if you liked this post, do not forget to share this post with your friends and family.