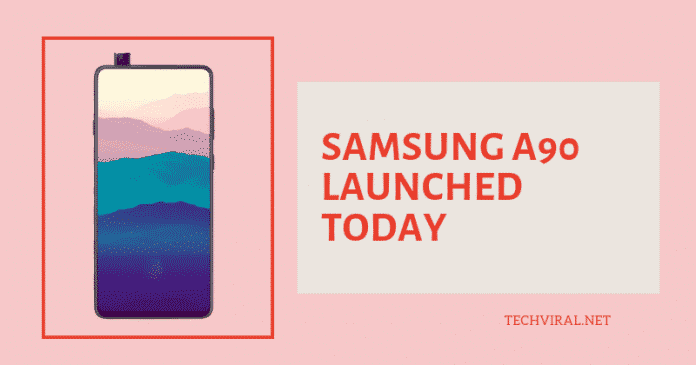 [dropcap]T[/dropcap]he 5G handsets that have been announced so far are variants of flagship and top manufacturer’s lineup, for example, the Galaxy Note 10 Plus 5G, OnePlus 7 Pro 5G and many more.

Samsung, however, is looking forward to releasing the latest mid-range 5G handset with high-end device’s specifications. The upcoming 5G handset of the Galaxy A series is Samsung Galaxy A90 and fits into the mid-range smartphone series with amazing specifications.

The upcoming device of Samsung focuses on high-end features that are quad-camera, a flip-up camera, which is a tactic to compete against the Chinese manufacturers. The Galaxy A90 has a lot of potential as per its spec sheet. The phone comes with 5G connectivity and Samsung DeX support.

The A90 5G has a Snapdragon 855 processor, 6GB or 8GB of RAM, and 128GB of storage. The screen is a 6.7-inch 1080p OLED panel with a small “Infinity-U” notch and an integrated fingerprint sensor. There’s a triple-camera system with a primary 48-megapixel sensor (presumably Samsung’s own), an 8-megapixel ultrawide camera, and a 5-megapixel sensor for depth information, along with a 32-megapixel selfie camera. The battery is 4,500mAh and charges at up to 25W.

Under the hood, Galaxy A90 has a Snapdragon 855 processor, 6 or 8GB of RAM, and 128GB of storage. The display is a 1080p OLED panel of 6.7 inches with a small “Infinity-U” notch. Talking upon security, the phone will have a face unlock, and an integrated Fingerprint sensor.

The battery is 4500 mAh which may provide a full day backup that charges at up to 25 watts. The Galaxy A90 is set to release in South Korea by today, and the prices are not yet declared.