Are we going to leave something for the presentation that the South Korean giant Samsung will make this week of its new devices, the Galaxy S9 and S9 Plus? It seems not, since the closer we get to February 25, the more details are appearing about both models. The new data came this time through a retail chain, which has filtered all the official features and images of the Samsung Galaxy S9 and S9+.

The wait is over, because in 6 days we will see the Samsung Galaxy S9 and its premium model, the Galaxy S9+. On Sunday, the Samsung conference will take place prior to the start of MWC 2019, and in it, they will present their two new devices to the world. A smartphone about which almost we have nothing to corroborate/deny certain characteristics because filtered information has virtually revealed everything and today has been the auction.

Official features and images of the Samsung Galaxy S9

Recently, a well-known site has published a ‘leak’ of those that leaves no room for imagination, as it practically consists of all the official features and images of the Galaxy S9 and S9+. Some specifications and photos obtained from a German retail chain on which we rely for the following data:-

Nothing new under the hood, as the data reconfirms a design in glass and aluminum or similar to the Galaxy S8 slightly narrower by adopting the ratio 18:9 in its panels, a Super AMOLED screen of 5.8′ inches and 6.2′ for the Galaxy S9 and S9+ respectively with Quad HD+ resolution, FullView design, curved frames and Diamond PenTile matrix, keeping the side button for the virtual assistant Bixby. The terminal comes with IP68 certification for water and dust.

The fingerprint reader remains in the back with a longer appearance, and both phones will have an iris scanner and facial recognition system in the style of the Face ID. A triple biometric security, in short. The external design is completed with stereo speakers created by the firm AKG that will provide surround sound using the top and bottom of the terminal.

As it has already been happening, both models will mount different processors according to the market in which they are sold. The retailer has listed the Galaxy S9 and S9+ with an 8-core Samsung Exynos 9810 processor, 4 high-performance 2.9-GHz processor and 4 1.9-GHz processor. This notes that here in India the new phones will use the processor created by Samsung itself, while in other places like the United States or Japan will receive the Galaxy S9 and S9+ with Qualcomm’s Snapdragon 845 chipset. 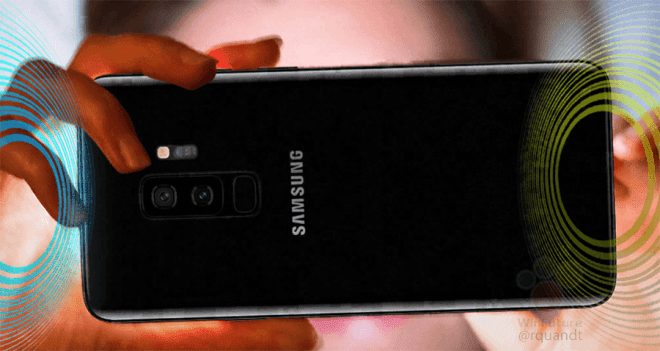 The S9 will have 4GB of RAM and the S9+ will reach 6GB of RAM. According to the website, the “standard version” will have a 64GB UFS 2.1 storage space, expandable to 400GB through a microSD card. The standard versions will have support for a single SIM card, although there will be variants of both DualSIM models.

The Galaxy S9 will mount a single 12-megapixel rear camera with a variable focal aperture of f/1.5 and f/2.4 to adapt to different lighting conditions. The front camera will be 8 megapixels and aperture f/1.7 with autofocus.

In contrast, the Galaxy S9+ camera will be dual, with the same main lens as the S9, 12 Megapixel with a variable aperture of f/1.5 which will be accompanied by a secondary sensor of 12MP and aperture f/2.4. The front is also 8MP, and both cameras, in both the S9 and S9+, can record full HD resolution videos in slow motion to a limit of 96 frames.

Again as we already knew (although not officially), the Galaxy S9 will come with a 3000 mAh battery and the Galaxy S9+ with a 3500 mAh battery, both with Fast Charge support. The two terminals will bring the newly released Samsung Experience 9 with Android 8.0 Oreo installed and will debut in three shades of colours, Midnight Black, Coral Blue and Lilac Purple that we saw last week.

The price? That is exactly the data that most want to know and is not yet known, but according to the website the mobiles will be “100 dollars more expensive” than the Galaxy S8 and S8+, so the Samsung Galaxy S9 would have a price of $909, and the Galaxy S9+ priced at $1,009, since the S8 costs $809 and the S8+ $909 respectively. Moreover, the presentation will take place this Sunday, but its sale will start on March 8.