We all know very well that the iPhone is considered by many as the safest smartphone that exists. One of the factors that lead many experts to state this is the regular updates that the tech giant Apple sends to its smartphones and the tight control of applications that are submitted to the App Store. However, today we have a smartphone security comparison that clearly giving Apple top post.

The iPhone is considered by many as the safest smartphone that exists. One of the factors that lead many experts to state this is the regular updates that the tech giant Apple sends to its smartphones and the tight control of applications that are submitted to the App Store. But is there any evidence to prove it?

An analysis carried out by SecurityLab concluded that the tech giant Apple is the company that offers the best results when it comes to mobile operating system security updates. On Android smartphones, only two have achieved acceptable scores.

iPhone is the safest smartphone

SecurityLab security company used their Twitter account https://twitter.com/SecX13/status/968225118517452800 to reveal a table that examines and shows the results of four very important factors: 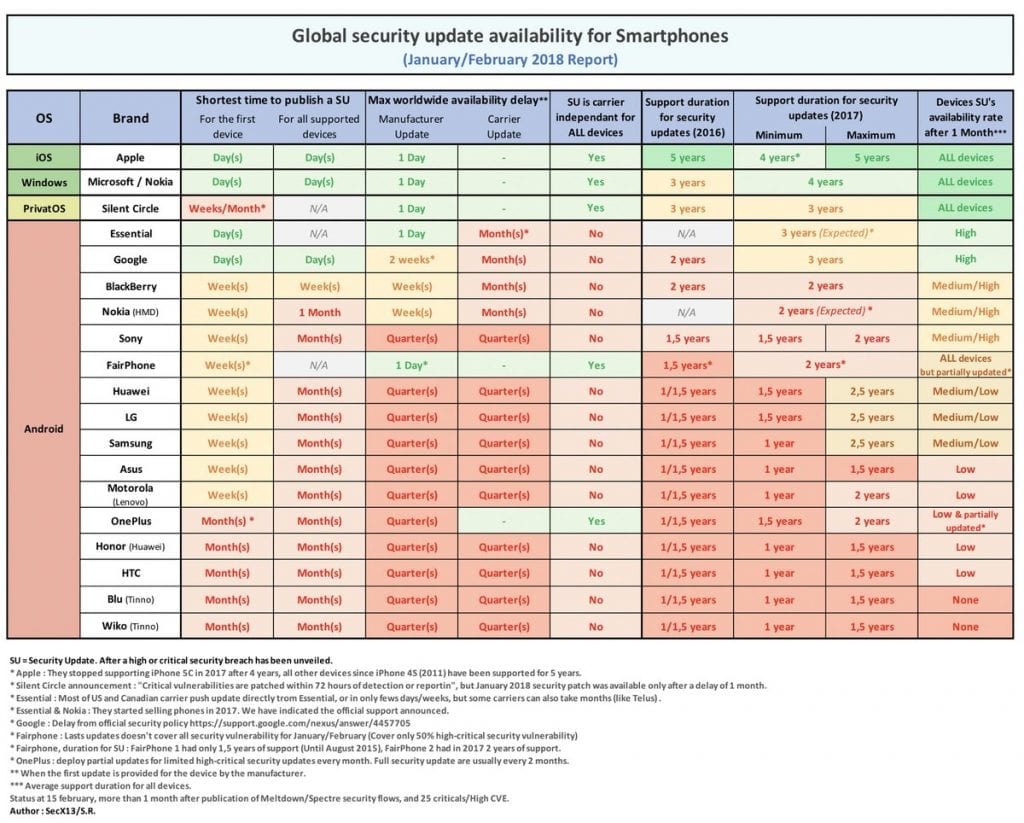 As you can see from the table, that the tech giant Apple was green in all categories. Thus, the Apple brand proved to be the companies that take the least time to make a security update available (only days), all updates are available worldwide in a 24-hour timeframe and updates can be installed regardless of the operators’ telecommunications.

In addition to all this, the tech giant Apple offers security support and updates for all of its devices over five years; with the exception of the iPhone 5C that just received security updates for four years.

On the Android side, the results have not turned out so positive, unlike what happens in the Apple World. Essential Phone and Google were the only manufacturers to score relatively high, although both brands depend on carriers to deliver security updates to branded users.

This means that possible vulnerabilities that need to be eliminated within a few days will take months to resolve. In addition, both Essential Phone and Google only send security updates over a three-year period.

The South Korean giant Samsung who is the market leader was not at all pleased with the results presented by this study, staying above the middle of the table. In all categories received the colours orange or red. Faster security updates were measured in weeks rather than days, with some devices taking months. In addition, the South Korean giant Samsung only offers security updates for a period of between 2.5 and 1 years.

Nowadays, smartphones are the “personal computer” of many people and, if you look carefully, a large part of the population has in these devices a lot of information that should not be shared with anyone. There are private conversations, bank information and, in some cases, health data. In this way, the safety of smartphones should be a priority for all manufacturers.

With these results, the tech giant Apple has once again shown that it intends to keep its devices safe and to preserve the confidentiality of all iOS users.

“We see that privacy is a fundamental human right that people have. We are going to do everything we can to help maintain that trust.” Said the CEO of the tech giant Apple, of course, Tim Cook.