Sony files patent for new contact lenses which will have the potential to record and play videos. You will be able to turn it off and on by closing your eyes.

Sony is not the sole company to have filed a patent for smart contact lens, Samsung and Google has also filed a patent for the same. It will let you to record and playback the video you will record. The Japanese tech giants termed the idea as “a contact lens and storage medium capable of controlling an image pickup unit provided in the contact lens.”

Google unveiled a lens project that that detects person’s blood sugar levels, which is specifically designed for diabetes patients. The South Korean giant, Samsung also filed a patent at Korea for a contact lens with a small camera that can be controlled with the blink of eyes.

The tech giants are showing keen interest in the wearable technology sector. Sony filed a patent with the US Patent and Trademark Office for smart lenses with camera like features. 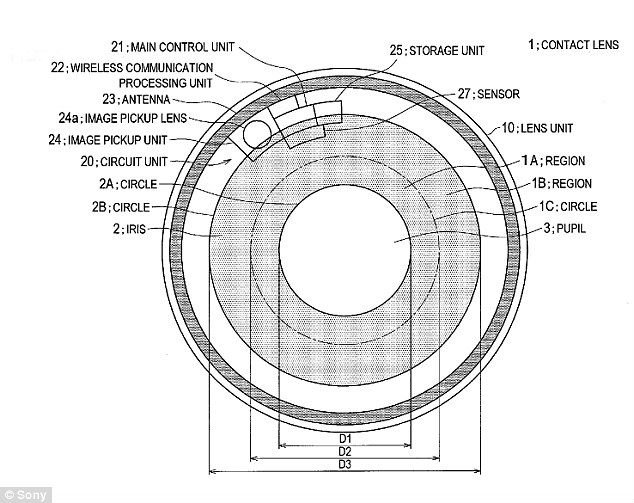 The patent also states that the contact lens will possess a camera with zoom, focus, stabilizes images and adjust its aperture. The photos will be automatically sent to a phone or you will be able to see the images in front of your eyes, so screen is not required. A sensor on the lens determines pressure from the eyelid and captures the image before or after the person blinks. The contact lens can capture as well as record videos, and you will be also to play the recorded videos.

However, the patent has not been approved yet. The smart lens would use sensors to detect when the person closes his/her eyelid.

On closing the eyelids, users could be able to switch the camera on and off. The contact lenses will also come with inbuilt storage for storing photos and videos, without the requirement of external storage. The Sony’s patent is different as Sony contact lens would have internal storage system.

“The contact lens according to each embodiment of the present disclosure has an image pickup function and performs predetermined image pickup control in accordance with blinking or the like of a user,” Sony’s patent application reads. “This makes it possible to make an intelligent contact lens, thereby remarkably improving usability.”