According to the latest reports, the well-known American video game developer and digital distribution company, of course, I am talking about the Valve’s well-known Steam Play for Linux now lets you play Windows games.

Recently, the well-known American video game developer and digital distribution company, of course, I am talking about the Valve which has launched its new service, known as Steam.TV platform, So, is this a true competitor of Twitch?

Some say Steam.TV was accidentally released by the well-known American video game developer and digital distribution company, of course, I am talking about the Valve. The truth is that the service remains online and can be accessed from here. On the other hand, the platform continues to broadcast the official Dota 2 championship.

So, now after the launch of the Steam.TV platform, Valve, without any prior announcement, has released a new version of Steam Play. With this new version, which integrates the powerful Wine tool with Steam (which was given the name of Proton), will allow all games that the company makes available for Windows will also work on Linux as well.

If you are a Linux user, try this new version of Steam Play and learn which games are already available.

The new version of Steam Play is undoubtedly great news for Linux users who enjoy playing. If so far Linux could be a barrier to play, everything can now change with this fantastic Valve tool.

According to the company, Steam Play offers game compatibility for Windows on Linux systems. This new version includes a tool called “Proton“, which in practice is a modified version of Wine that makes use of Vulkan so that it is possible to run Windows games on Linux that require DirectX 11 and 12. 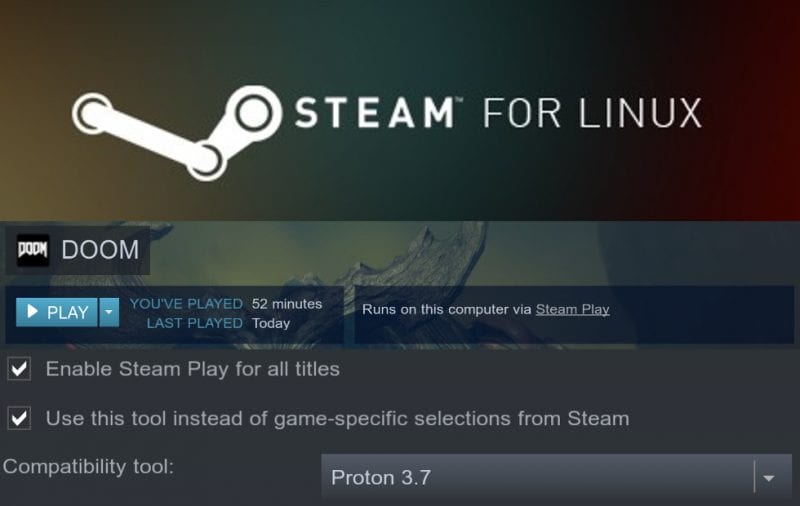 Overall this new version will work in the style of the famous PlayOnLinux tool.

According to Valve’s statement, the company has been supporting the Wine, Vulkan and DXVK project for about two years. For now, this tool is still in beta but fully operational for the above games.