If we talk mainly about Android, plenty of instant messaging apps are available on the Google Play Store. However, none of them come close to WhatsApp in terms of functionality. WhatsApp for Android has fantastic features like Voice & video calls, stickers, GIF support, etc., that never fails to grab users’ eyes.

Talking about the features, WhatsApp groups remain the most dominant feature. You can create a group and add contacts to start a conversation on WhatsApp. Similarly, others can also add you to the group. Although the Group conversation feature is useful, some people get annoyed when they are added to random WhatsApp groups.

Steps To Stop People From Adding You To WhatsApp Groups

However, to deal with such issues, the cross-platform messaging and VoIP service has rolled out a new feature that allows users to control who can add them to WhatsApp groups. The feature will prevent others from adding you to random WhatsApp groups.

1. Head to the Google Play Store and update your WhatsApp Android app.

2. Once done, open WhatsApp and tap on Settings.

5. Under Privacy, you will see a new option Groups. Tap on it.

6. Now, select your desired option under the option ‘Who can add me to groups’. If you don’t want to be added to the WhatsApp groups by unknown contacts, select ‘My Contacts’.

7. If you don’t want anyone to add you to WhatsApp groups, select ‘My contacts except..‘ and select all contacts. This will prevent all your WhatsApp contacts from adding you to groups. 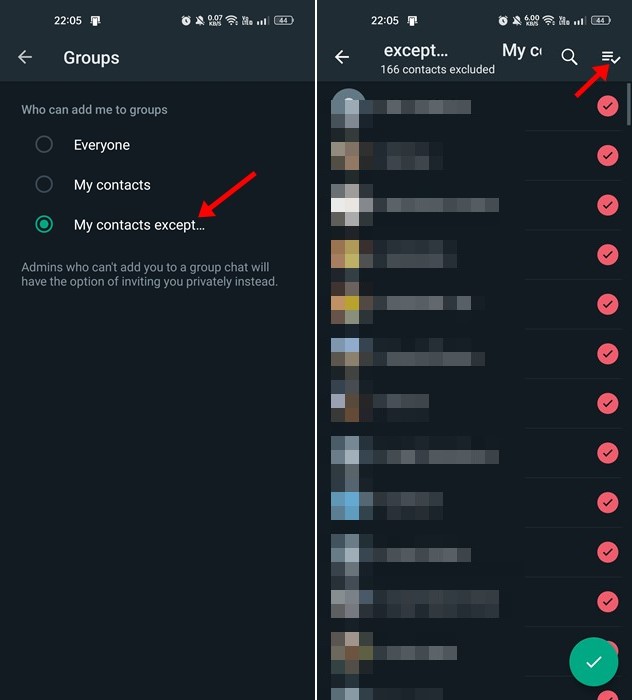 That’s it! This is how you can stop people from adding you to WhatsApp groups. If you have any other doubts, let us know in the comment box below.