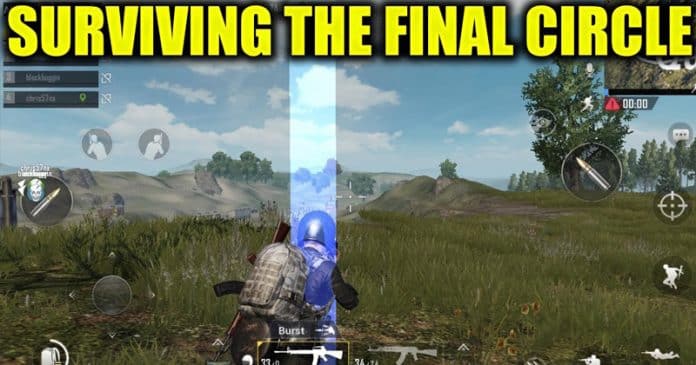 Look at the gaming section on the Google Play Store; you will find PUBG Mobile dominating the entire gaming section. Currently, PUBG Mobile is played by millions of users, and it is one of the top-rated mobile games available for Android and iOS devices. The best thing about PUBG Mobile is that it’s high on visuals and was pretty addictive gameplay.

PUBG Mobile is a battle royale game in which you will be dropped with 99 other players to compete against each other. In this game, you must survive until the end to get a chicken dinner. However, the game is not as easy as it sounds. Through the game, you will come across different types of players.

Best Tips To Survive The Last Circle Of PUBG Mobile

Well, before entering the final circle, make sure to look at all the places behind you. If you have a scope, then use that to search for the enemies behind the rocks, bushes, trees, etc. Scanning the area before leaving will ensure that nobody is behind your back.

If you hear the gunfire from a distance, try to engage or go prone if your health is low. After all, everyone wants fewer enemies in the final circle.

If you and your teammates are getting shots and cannot figure out the location, throw a Smoke grenade. You can also do the same thing while reviving your teammates.

So, avoid looting an enemy you have just killed in the final circle, or you will be spotted easily by enemies.

Well, running during the earlier stages of the game is relatively safe. However, running on the last few circles will eventually get you killed.

If you have no other option left apart from running like if you are out of the zone, you need to run in a zig-zag motion. However, running at the last few circles will surely let you killed because well-grounded enemies can spot your location easily.

Healing Materials are another essential thing that you need to have. You must have enough consumable items like PainKiller, Energy Drinks, First-Aid Kit, MedKit, Bandages, etc. Make sure to drink the Energy drink before you enter the last circle.

Don’t Shoot If You Are Not Sure

Usually, people start to shoot at the enemies once spotted to get a kill. However, Shooting at other players immediately draws all attention to yourself.

So, don’t shoot unless you are sure you will get a kill or the enemy will spot your location. My teammates always get me killed due to inappropriate shooting, especially at the last circle. So, don’t make this mistake.

If you are playing Squad, then spreading your teammates in a different direction will be the best thing you can do. However, don’t spread your fellow members beyond 50 Meters, or you will have nobody to revive you.

The reason behind this is to minimize the effect of throwables. If everyone hides behind a rock or tree, the enemy needs a perfectly cooked grenade to kill your team.

I have met a few people who don’t know how to check the rankings of other players or don’t care about their own rank, and they win games easily. Another thing is that Patience is everything on PUBG Mobile and getting into quick actions at the final circle is always risky.

So, these are some of the best tips to help you master the last few circles of PUBG Mobile. If you have your own suggestions, start a discussion in the comment box below.