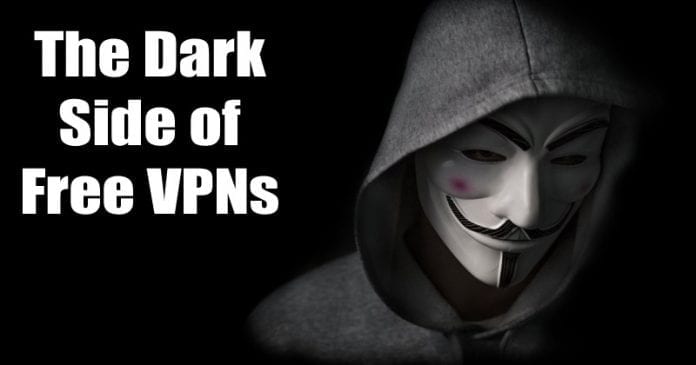 People always look for free VPN apps to bypass website restrictions. Right now there are tons of free VPN tools available on the internet which claims to hide your online identity. However, the free ones can actually cost you a lot because a recent study tells an interesting story.

Contents show
The Dark Side of Free VPNs: Important Things You Should Know
So, is Free VPNs Safe To Use?
So, What does the Free VPNs do?
#1 Selling Your Data
#2 Malware
#3 Stealing of Bandwidth
#4 Browser Hijacking
So, which VPNs are safe to use?

The Dark Side of Free VPNs: Important Things You Should Know

If we look around, we will find that the use of VPN services are on the rise. VPN apps help users to access a remote network securely for different reasons. In India, VPN apps are mostly used for torrenting purposes because most of the torrent sites are blocked on the region.

In just a few months, the VPN apps have gained widespread usage in bypassing country restrictions to access blocked services. VPNs or Virtual Private Networks are also among the best security tools a web surfer can have. VPN encrypts your incoming and outgoing traffic making you entirely anonymous.

However, people always look for free VPN apps to bypass website restrictions. Right now there are tons of free VPN tools available on the internet which claims to hide your online identity. However, the free ones can actually cost you a lot because a recent study tells an interesting story.

So, is Free VPNs Safe To Use?

Recently, researchers of Commonwealth Scientific and Industrial Research Organisation(CSIRO) have analyzed 283 different Android VPN apps. The researchers found that almost 75% of the VPN apps use third-party tracking libraries, so, they can’t be trusted.

Out of 283 Android VPN apps, 82% of the apps required permissions to access user accounts and text messages which is not at all necessary. The study also shows that more than 38% of VPN apps come with malware or spyware that can trap innocent victims.

The study declared “18% of the VPN apps implement tunneling protocols without encryption despite promising online anonymity and security to their users. In fact, approximately 84% and 66% of the analyzed VPN apps do not tunnel IPv6 and DNS traffic through the tunnel interface respectively due to lack of IPv6 support, misconfigurations or developer-induced errors.”

So, What does the Free VPNs do?

Actually, these so-called free VPN tools are not exactly free because you are paying the developers in some other ways. If you are interested to know the most common ways through which free VPN exploit you, read out the article.

If you are using VPN apps for a while, then you might be well aware to the fact that some of the VPN service providers come with a strict no log policy. Usually, the free VPN apps don’t have any no-log policy. That simply means that the VPN provider collects your browsing data. After receiving the data, they sell it to advertising and analytics company for some easy money.

Recently, the Israel based Hola was found stealing bandwidth from users. Not only that, but Hola was also found reselling the stolen bandwidth to its sister company known as Luminati. Well, these things are familiar with Free VPNs, and they can steal your bandwidth to resell it to other organization.

Browser Hijacking means getting the full control over the internet traffic. Free VPNs can redirect your browser to websites without your permissions. The recent study of CSIRO says that the popular VPN service provider, Hotspot Shield redirects user traffic to alibaba.com and ebay.com to generate affiliate commisions.

So, which VPNs are safe to use?

Well, not all free VPNs are bad. Some of the free VPN apps are entirely safe, and they don’t perform any evil tasks. Even if you are willing to try a VPN app for free, you could try some premium VPN service providers like Express VPN or NordVPN. These VPNs are generally premium, but they provide users a trial period. After the trial period, you will be automatically withdrawn to the free version.