An American company, uBeam, became known in Silicon Valley for developing a wireless charging system that works with ultrasound waves. However, until today the company has avoided public demonstrations of its technology.

But, recently, the American company uBeam showed off Futuristic wireless charging tech to the public for the first time.

The company has been a mystery all this time. Many have criticized for not discussing the prototype in detail or making public demonstrations. However, it seems that uBeam has finally decided to show its 100% wireless charging technology, which looks like it works.

As noted by The Verge, Meredith Perry (CEO) first showed the prototype developed by uBeam works during the Summit technology Upfront event held in Los Angeles, California. Perry had clarified that it was a private demonstration, which was difficult to achieve since several videos began to appear on Twitter within the hour.

Wireless charging of a phone thru the air. Woh. 👏 1st public demo ever @ubeam #UpfrontSummit pic.twitter.com/I6GZx7KDri

As you can see in the video, Meredith Perry holds what appears to be an Android phone near a device with uBeam technology and waits a few seconds before loading a symbol appears on the screen. The surprise of those present did not wait for applause towards what could become a truly revolutionary technology.

According to the American company, they are building the “energy infrastructure of the future,” helping to stop the cables from charging our electronic devices once and for all. It certainly promises to be a great innovation in the field.

Now, how does this technology really work? The company, on its website, explains that it all starts with a transmitter that emits ultrasound waves. It works like a speaker, but instead of making an audible sound, it transmits a high-frequency sound safe for people and pets.

These ultrasound waves are transmitted through the air with a range of several meters. They can be detected by an electronic device (such as our mobile phone) to reconvert them into electrical energy that allows recharging the device. 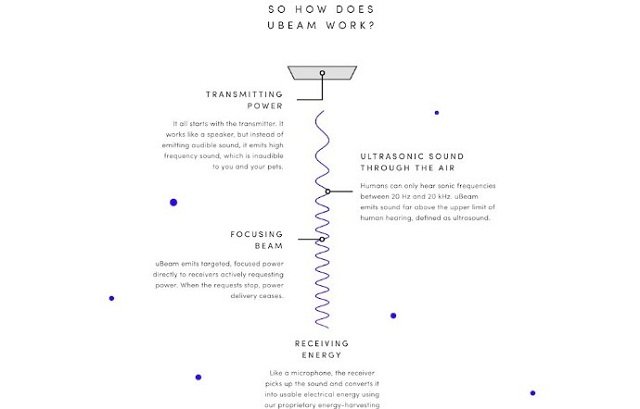 Finally, the challenge that uBeam faces are to be credible, and this is because the company has never clearly shown, until today, if the technology it has developed works.

But there is no doubt that this technology will be revolutionary and allow a huge change in how we use and recharge our electronic devices. So, what do you think about this new tech? Simply share your views and thoughts in the comment section below.