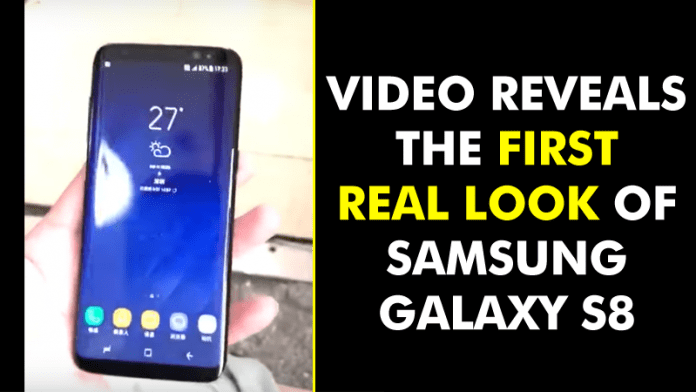 Recently a video was posted on SlashLeaks YouTube Channel, and the short video shows almost all the rumored changes that we are expecting from Samsung. The short 8-second video shows Samsung Galaxy S8 in its full glory.

There were lots of rumors regarding Samsung Galaxy S8 in the market. Well, we all know that Samsung is all set to announce their upcoming Galaxy S8 at its March 29 event. However, it looks like someone had already got hands on a working unit of Galaxy S8.

Recently a video was posted on SlashLeaks YouTube Channel, and the short video shows almost all the rumored changes that we are expecting from Samsung. Well, the YouTube channel SlashLeak had previous posted many videos which show Galaxy S8 in its full glory.

Well, If the video is legitimate, this is how the Samsung Galaxy S8 will look like:

The 8-Second video also shows a mysterious button on the display when the screen turns on. It might be Samsung’s new assistant “Bixby”

Unlike previous models of Samsung like Samsung Galaxy S7 and S7 Edge, Galaxy S8 will have rounder corners. You can see the corner in the below screenshot

Well, in the short video Galaxy S8 appears to have ditched the capacitive touch buttons which are located on the bottom border of the previous smartphone. The touch buttons have been replaced with on-screen buttons.

The video also throws lights on the back panel of Galaxy S8. Samsung had taken a big step by moving the fingerprint scanner to the back of the phone.

If you want to check out the full video then here it is: