Whatsapp has announced new features to its joinable calls feature. In the new update, the instant messaging app allows the users to join ongoing group video/voice calls right from the chat window.

In the Whatsapp group, you will now see a dedicated button beside the group chat icon to join the voice/video call. Now, the group call notifications will display the name of the group instead of showing the participants’ names. 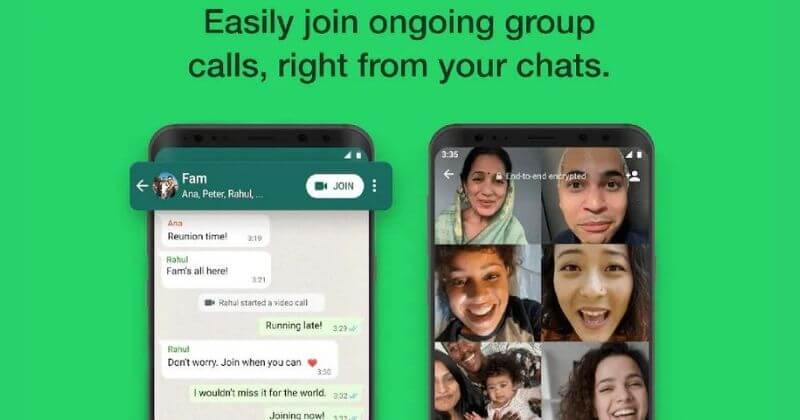 Whatsapp has introduced few changes to the joinable calls feature. One can now join the ongoing Whatsapp group call from the group chat window. All the ongoing group calls will be visible to your chats, so you can easily join as soon as you open the app.

In a statement, Whatsapp said,

“Today we are enhancing the experience of the joinable call through integration to group chats. So, now group calls are contextual to your group chats and you can effortlessly join them right from the chat tab. With group calling growing in popularity, integrating joinable calls gives WhatsApp users a new spontaneous way to connect with their family and friends groups.”

This new joinable feature will help the users to directly join the group call whenever they want; now, you don’t need to disconnect and call again.

The uses will get a notification that shows the group name. However, only the participants who are in the group are allowed to make or join the call. You can see the call in the chat list, so one can see which group call is going on. For this joinable feature, Whatsapp has kept a lighter distinct ringtone.

The Joinable calls were introduced in July this year. However, improvements to it are now brought by integrating it with Whatsapp groups.

Whatsapp is regularly adding new features from last week. Recently, it rolled out end-to-end encryption for backups. It is also upgrading the voice messages function with a global voice message player. This will let the users listen to voice messages when they look at recent chats.