WhatsApp Is Testing An Awesome Feature For Group Chats

WhatsApp is the most used instant messaging application in the world. The app that is now in the hands of Facebook allows us to communicate in just a few seconds with anyone, no matter where the other person is in the world. Such is its success that already has more than 1.2 billion users, everything a confectionery to make it profitable.

We knew that for a few months, WhatsApp is testing new ways to enable its users with businesses through this instant messaging service as long as they have verified accounts. In this line, the company has given a new turn of its business model: soon we will be able to choose if we want to receive specific business messages – other than advertising or spam – or to continue using WhatsApp as before. But what exactly is this new WhatsApp for the business called WhatsApp Business?

Companies that want to communicate with users through this free messaging service in the not too distant future will do so through this new Business app, the new application that will be available for Android, iOS and Windows Phone devices using a corporate profile.

As we recently reported that the social network of Mark Zuckerberg is trying to monetize and get the most benefit from the enormous potential that WhatsApp can offer with the new version of the application that is being finalized.

As you know there is a WhatsApp Business on the way as we told earlier, a modality of the app that will allow customers to quickly contact companies through the messaging app. A service that will be free for SMEs but will have a cost for large companies that handle thousands of clients in the messaging application. Well, now social network giant Facebook has added a new button, in the form of a shortcut, of WhatsApp.

WhatsApp has more than a billion groups and finally has been paying more attention to this area of the application. This time, the company is testing a different way of responding to group messages.

It’s something simple: WhatsApp will have a “respond privately” button to say something directly to a group contact.

As WABetaInfo explains, the app will open a private conversation between you and the user, and then quote the group’s message, allowing you to respond privately to something that was said in public. 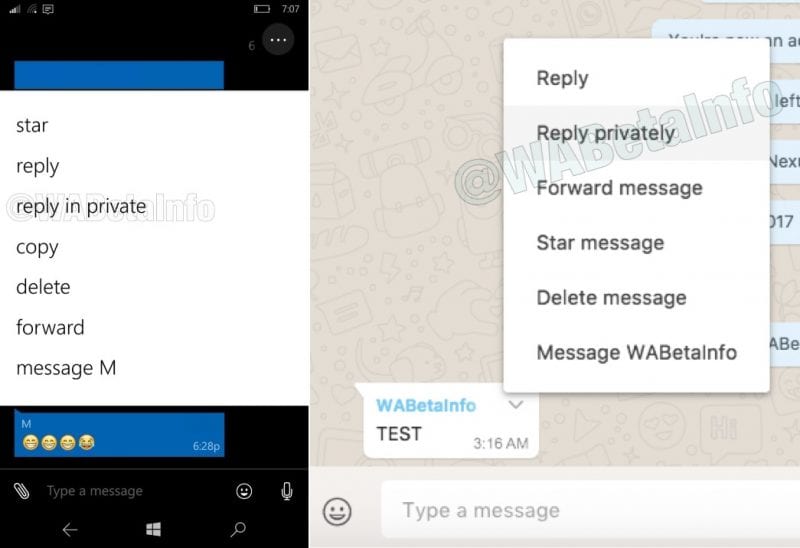 The feature made headlines in the WhatsApp Web code, and can already be used in the beta for Windows Phone, while iOS and Android should be contemplated later.

Recently, WhatsApp started giving more powers to group administrators. They may bar ordinary users from sending messages, releasing only the read – something similar to a Telegram channel.

Administrators may also prevent common members from changing the subject, icon, and description of a group. This is present in beta versions of WhatsApp for iOS and Android and now it also began to appear on Windows Phone as well.