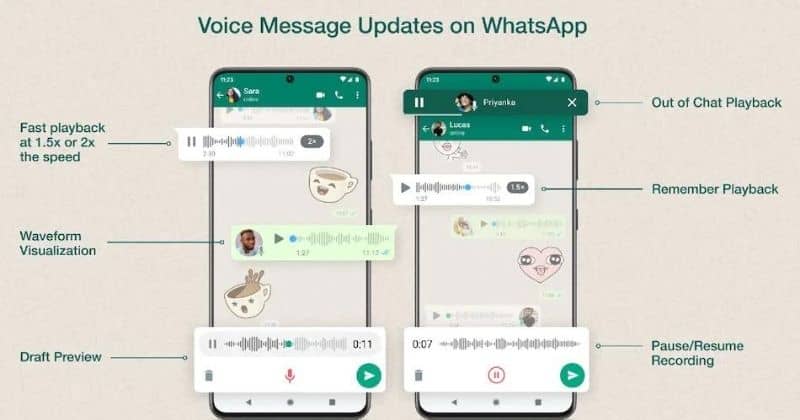 Whatsapp is updating its Voice messages with many improvements over the coming weeks. On Wednesday, Whatsapp has announced a host of new updates for Voice messages.

These new features will be easy for people to communicate through voice notes. The update brings a draft preview option, pause and resume voice recording, out-of-chat playback, and waveform visualization.

Few of the features are already available for some users. The updates are set to arrive for everyone in the coming weeks.

Voice Messages on WhatsApp Are Getting Better

These updates will be available for both Android and iOS users. The instant messaging app has also introduced a fast playback on forwarded voice messages.

Whatsapp announced that, on average, seven billion voice messages are sent every day by users.

One of the most useful features is out-of-chat playback; it allows you to listen to voice messages outside the chat. With this, you can multitask or respond to other chats on the app.

The chat playback feature was first referred to as a global voice message player. In January, it was spotted testing for iOS beta testers. Last month, it was out for a few iPhone users. Recently, the feature was spotted in development for desktop users.

Secondly, you can now pause and resume recording whenever you want. This is helpful for people with language barriers. Whatsapp started testing this feature on iPhone in January, and the beta users of Android and desktop apps got it.

The major feature is waveform visualization; it shows the sound of the voice message to help users follow the recording. It also appears while listening to voice messages.

Whatsapp will roll out these features in the coming weeks. So, it will take time to reach all the users. Also, you need to have the latest version of the app on your device to use the new features as they arrive.