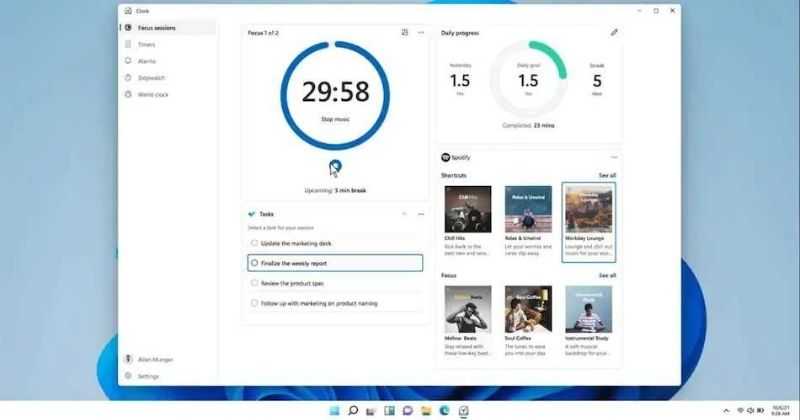 Microsoft is bringing the next Operating system update Windows 11 to all Windows PC and Laptops. Currently, the beta testing is going on with the Windows Insiders. However, every day we are getting news of new features, and the Windows chief Panos Panay has introduced a new feature called “Focus Sessions”.

Recently, Panos Panay has posted a short video on Twitter that shows the new version of Snipping Tool. And now he has shared a first look at the new Focus sessions.

In the short clip shared by Panos, we can see that the Windows 11 Focus Session feature allows selecting a task from the list of tasks. You can set how long you want the session to be.

Another first look from the team…#FocusSessions on #Windows11 coming soon. This has been a game-changer for me, especially with @Spotify integration #Productivity #Creativity #WindowsInsiders pic.twitter.com/HfJh4niDiS

Microsoft has done a partnership with Spotify in Windows 11 to help the users to complete the tasks while listening to music. Moreover, the company is also merging the OneNote Apps into one and it will be a part of the series of updates for the next 12 months.

The user can set a focus timer and complete the tasks while listening to music on Spotify. You will see a list of tasks on the page with a timer and on the right side there is a Spotify panel.

As of now, the new feature Focus Session is not available in the Windows 11 public build but it will be coming soon. The dashboards show you how many breaks you have, and the progress for the tasks and goals.

Currently, no other details are known except the things we see in the short video. But we can say this is something useful and we have to wait till it’s launched. Microsoft said that both the new features Snipping Tool and Focus Sessions are coming soon to Windows Insiders.

Windows 11 will be launched later this year around November. So, we can expect more details about the feature coming soon.