We all know very well that as the time is passing the technologies are evolving rapidly simply to make our lives better and efficient. Hence, now according to the latest reports, the well-known Chinese certification portal, of course, TENAA has recently approved the world’s first smartphone with 10GB of RAM.

Meet The World’s First Smartphone With 10GB Of RAM

A new variant of the well-known and radical smartphone, of course, I am talking about the all-new Oppo Find X which was recently approved by TENAA with 10GB of RAM, the well-known Chinese certification portal.

The update in the listing was made recently, while the rest of the specifications remains the same. The version released in Asia in August has 8GB of RAM, 256 GB of storage and the flagship SoC of Qualcomm, of course, Snapdragon 845.

This means that Oppo Find X (model PAFM00) will be the world’s first smartphone with 10GB of RAM. At the beginning of the year, leaked photos indicated that the well-known Chinese smartphone manufacturer, of course, Vivo prepared Xplay 7 with 10 GB of RAM and fingerprint reader under the screen. However, it has never been released.

It looks like Asus wanted to put 10GB of RAM in a high-end device, possibly the ROG Phone which is aimed at gamers but could not manage to do so. Roland Quandt says there was no way to put the memory over the processor in such a small space.

The well-known Chinese smartphone manufacturer, of course, Oppo’s flagship smartphone, of course, Find X stands out for its screen without notch that occupies 92.25% of the front space. It does this with the help of a mechanism that slides up and reveals the front and rear cameras. The 6.44-inch AMOLED display has 2340 x 1080 resolution.

Inside, we have the Snapdragon 845 processor, 256 GB storage and 3730mAh battery with VOOC fast charging technology, and if we talk about the operating system, then let me clarify that the Oppo Find X runs one of the latest version of Android, of course, I am talking about the Android 8.1 Oreo.

The rear camera is dual, with 16 and 20-megapixel sensors, while the front camera has 25 megapixels, it also comes with 3D facial recognition technology just like the tech giant Apple’s iPhone X (currently all its latest devices are featuring this technology) and replaces the digital fingerprint reader. 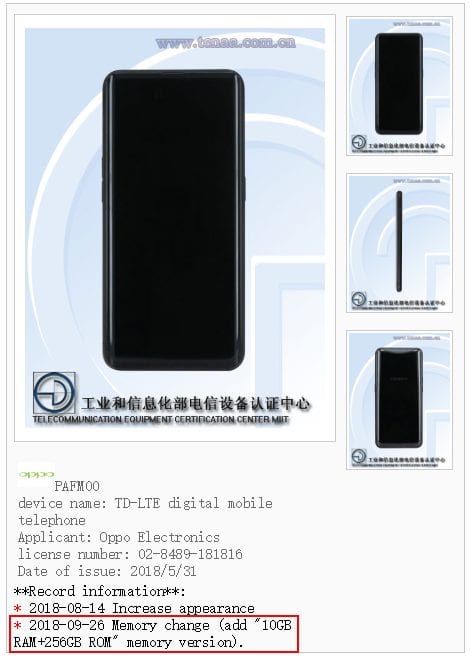 Moreover, the well-known Chinese smartphone manufacturer, of course, Oppo charges approx $828 for the version with 8 GB of RAM. The Gizmochina expects the version with 10 GB of memory will cost around $930 when it will be announced. So, what do you think about this? Simply share all your views and thoughts in the comment section below.