Recent a leak depicts something different story, as per the leaked promotional ad, the upcoming beast of Xiaomi, Mi 6 is expected to be launched in February this year and now allegedly scores Record-Breaking points.

Nowadays, it is a rare person who follows the world of technology and does not know Xiaomi, who has managed to launch some of the best products regarding price/quality.

For this year, Xiaomi is already preparing the new Mi 6, which may have, according to recent information, a surprising performance.

In 2016, Xiaomi began the year to market Redmi Note 3 Pro, which would become a sales success, followed by its top of the range Mi 5 during the MWC in Barcelona. From this model, many others were launched, with special emphasis on Mi Mix that surprised the world with its innovation.

After a year, Xiaomi is now preparing to launch its new top-of-the-range Mi 6, with expected launch for MWC Barcelona 2017, and promising to bring some news.

According to some rumors, the Xiaomi Mi 6 could be the first smartphone to be equipped with new processor Qualcomm Snapdragon 835 and the Adreno 540 GPU, and should be available with 4 or 6 GB of RAM and 64GB or 128 GB of internal storage.

In addition, it should bring the main camera of 12 MP, a front camera of 4 MP and the latest version of Android which is Android 7.1 Nougat with its own interface well known as MIUI. 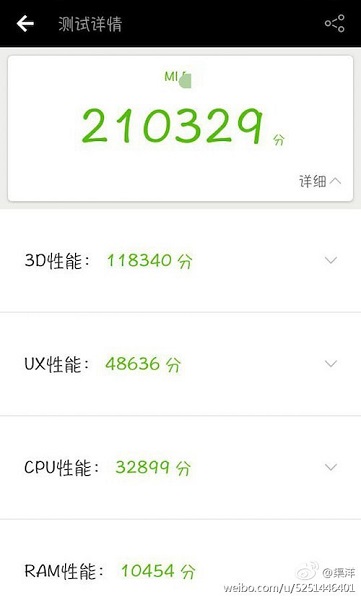 The great news comes to us from an image that has emerged in China with a support Antutu result that, if true, comes to put the Xiaomi Mi 6 at the top of the list of this benchmark application. According to the shared image, the new top-of-the-range Xiaomi reaches a fantastic 210329 points, which shows the true power that the new chip from Qualcomm has to offer.

The rumors also extend to the price, where it is advanced that this new model may have a price higher than the Mi 5, due to the use of better materials in its construction. Thus, the base model Xiaomi Mi 6 should be the 2,499 yuan that in a direct conversion, is around $ 360.