We all know very well that Razer the well-known brand of computer peripherals focused on gaming jumped into the market of smartphones and was the first company to launch a smartphone for gamers. However, now according to the latest reports, the well-known Chinese smartphone manufacturer Xiaomi to launch Razer phone competitor with the aircraft-grade cooling system, Snapdragon 845 And 8GB RAM.

With the recent introduction of the Razer Phone, several brands have started to prepare their bets for the gamers market.

As the well-known Chinese smartphone manufacturer, Xiaomi could be one of the next brands to bet on this area with a new smartphone dedicated to gamers.

Although it is very much associated with consoles, the gaming market is present in a large number of devices. Since the early days smartphones have become quite competent equipment to play, with games to be increasingly improved.

Looking at this perspective, Razer, a very player-centric brand, has launched the Razer Phone, a smartphone optimized for a better gaming experience. This concept that the Finnish company Nokia had already bet on the N-Gage is now gathering more followers, and Nubia has already shown interest in launching one of these devices.

The well-known Chinese smartphone manufacturer Xiaomi is another brand that may be preparing a smartphone for this audience, being known only by the code name BlackShark.

Xiaomi BlackShark – A smartphone for gamers

Although the well-known Chinese smartphone manufacturer brand Xiaomi has not confirmed or denied that it would be preparing a smartphone dedicated to gamers, however, recently an Antutu leak appeared that displays a new smartphone identified only by Xiaomi BlackShark. 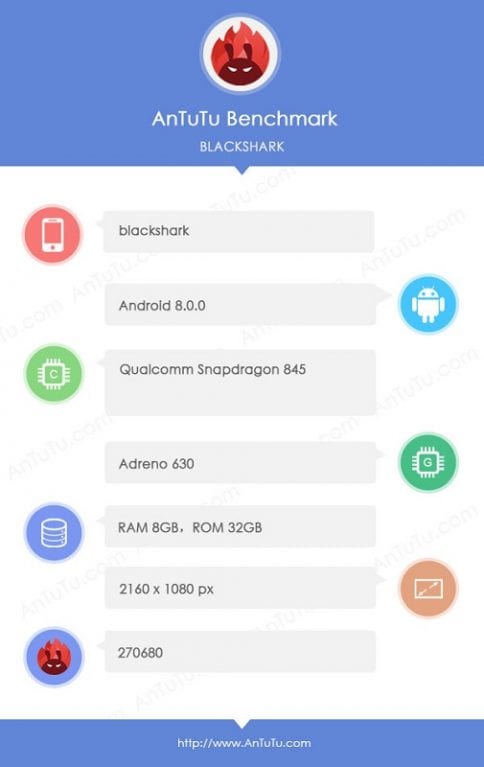 According to the shared features, this new smartphone will bring a Qualcomm Snapdragon 845 processor, 8 GB of RAM and 32 GB of internal storage. The screen will have a ratio of 18:9, with FullHD + resolution (2160 × 1080), however, its size and type of screen is unknown.

If it confirms this news, then the well-known Chinese smartphone manufacturer Xiaomi may be to present a new bet in its high range that will offer gamers an improved user experience while playing their favourite titles.