Zuckerberg accidently showcased an internal Facebook-only version of its own iPhone app, as part of the introduction of Facebook’s live broadcasting feature.

While presenting the new service which the social network dubbed “Facebook Live,” Zuckerberg made a small mistake where he accidentally showed what could be a new design and a new feature of the famous social network.

On April 6, the founder of Facebook decided to make their first live video which is a social network function with which plans to cope with the Periscope of Twitter simply to explain how it works.

However, in 6:22 minute of the transmission, the entrepreneur decided to make teaching practice and drew from his pocket his new iPhone in June to demonstrate how to use the service Facebook Live in a Smartphone, following a doubt raised it a User in the middle of the communication.

At that time, Zuckerberg said he would open “internal app of Facebook,” and that version looks yellow, not blue on his mobile phone.

In addition to the picturesque color change in the interface, the CEO began to explain to users that they should press on the top a blue button which does not exist in the latest version – to begin recording.

“Another way to start recording is returning to the timeline and starting a new publication,” he said moments later while showing unprecedented features in Facebook.

Moreover, while Zuckerberg continued with the explanation, you could be looking at some features of the existing social network, although entirely new ones. 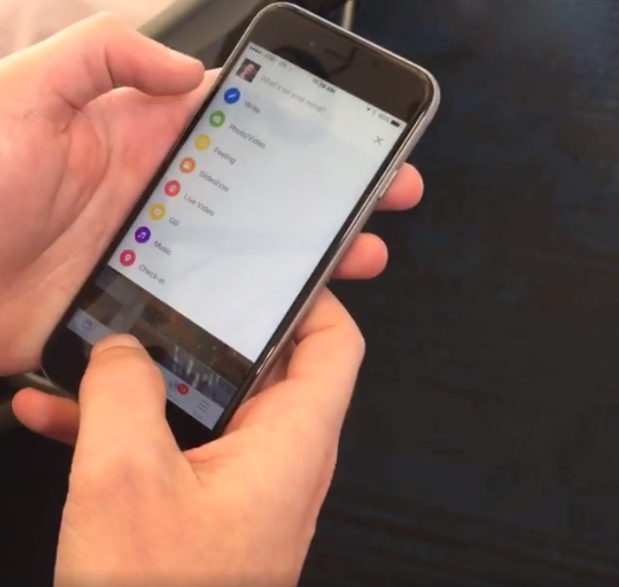 For example, icons organized by colors that are on the left side, which would be to write, upload photos and video, share a reaction, upload a presentation, record a live video, upload a gif, listen to music and share the location.

However, later the social media giant Facebook confirmed to The Verge that “this interface is not on my version of the Facebook app, it has been rolled out to some people already.”