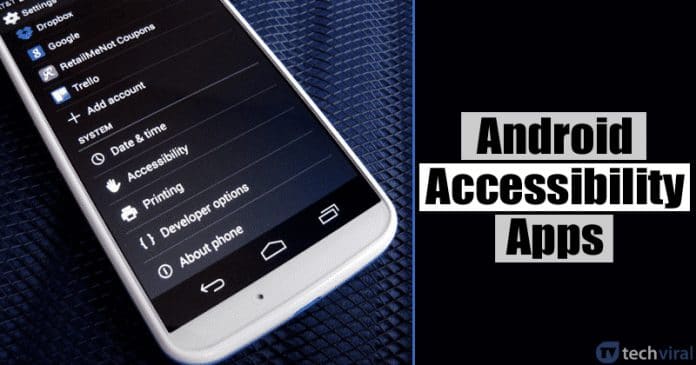 It’s no doubt that a disability can make life more challenging. Whether you are visually impaired or physically disabled, the chances are that you can’t use your smartphone like others. If you are amongst those users, you might already deal with the usability challenges that smartphones often pose.

The good thing is that many third-party developers and Google are making efforts to make things a little bit easy for users with disabilities. Many Android apps on the Google Play Store can help you work your smartphone better.

Also Read: How To Protect Your Private Data From Android Apps 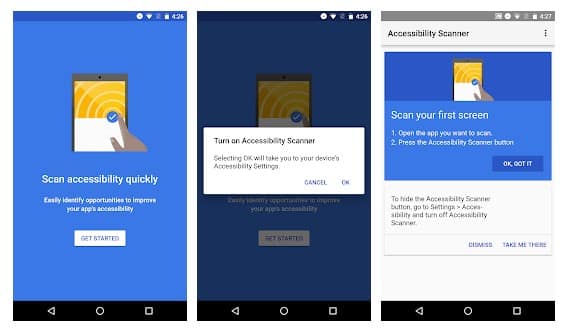 It is one of the useful apps that everyone should use. The Android app promotes accessibility improvements for Android apps without requiring any technical skills. The primary purpose of this app is to make things easier to read.

It suggests to users a few enhancements for Android apps to make things easy to read or access. For instance, it will suggest enhancing the text by increasing the background contrast, color, brightness, etc. 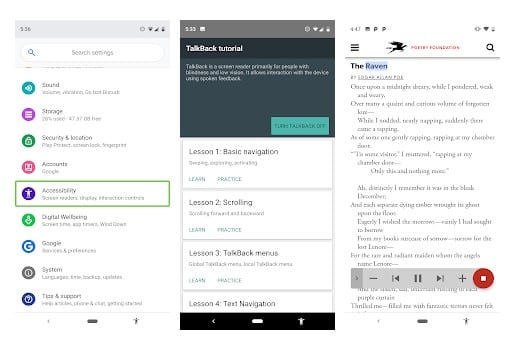 Android Accessibility Suite is meant to help visually impaired people interact with their devices. Google itself backs the app, and it’s relatively simple to use. 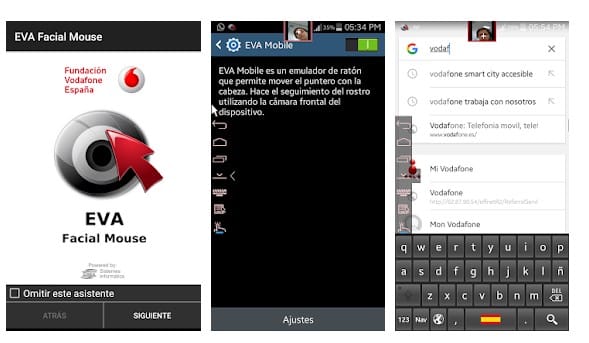 It is another best Android accessibility app for users with touch interaction problems. The Android app allows people with spinal cord injuries and cerebral palsy to interact with smartphones. 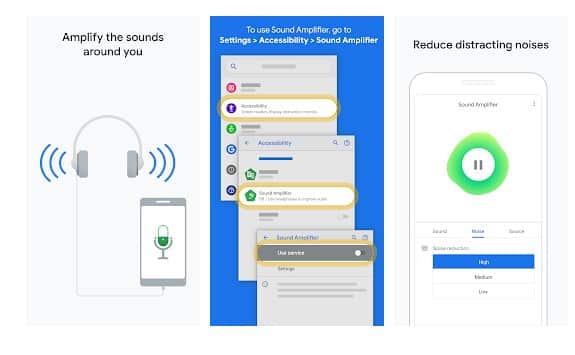 If you have a friend or family member who suffers from hearing loss, recommend the Sound Amplifier Android app. As the app’s name says, Sound Amplifier is one of the best and most widely used Android accessibility apps to amplify sounds.

It automatically picks every sound from your microphone, boosts the speech-related frequencies, and reduces the rest. The user interface of the Sound Amplifier is pretty clean. It’s one of the best Android accessibility apps that can provide a better listening experience to users suffering from hearing loss. 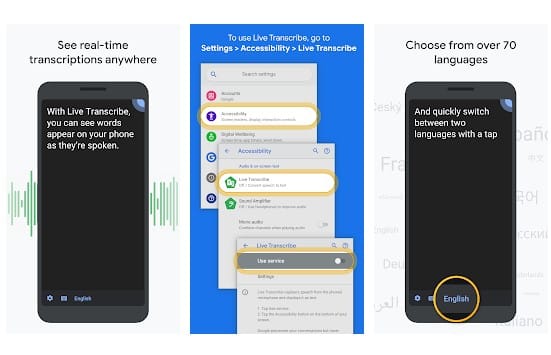 With Live Transcribe, Google wants to help deaf and hard-of-hearing users. The Android app uses Google’s state-of-the-art automatic speech recognition technology. Live Transcribe for Android is known for real-time transcription of speech and sound to the text on your device’s screen.

What’s more useful is that Live Transcribe also got bilingual support. That means it can also convert the speeches into different languages. 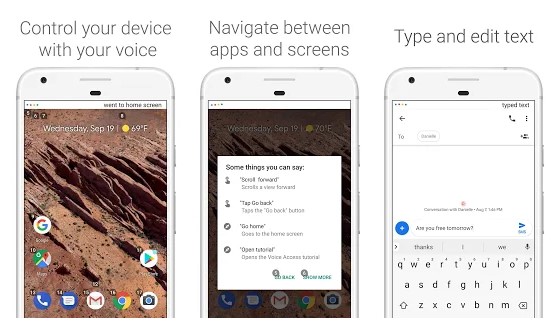 This app is from Google, one of the best accessibility services available on the Play Store. The app is designed to help users who find it hard to operate the touch screen.

Voice Access lets you control your device with your voice. You need to use the voice commands to navigate between apps and screens, edit text, open apps, etc. 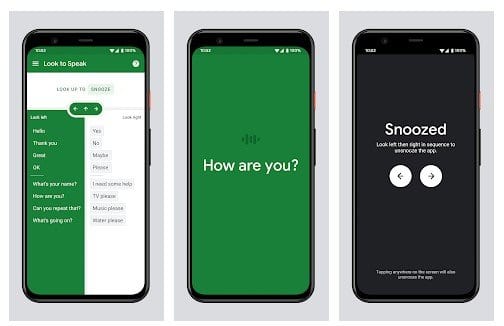 Look To Speak is another accessibility app for Android, backed by Google. The Android app is based on Eye Gaze technology that uses your phone’s camera to pick up your pupil’s light reflections and translate your eye’s movement into actions.

With this app, you need to move your eyes to command Android to speak pre-written phrases. 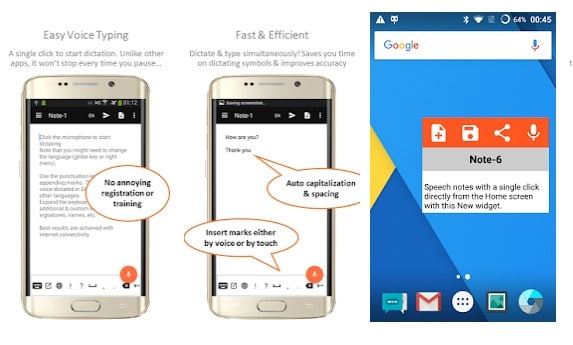 This app is for those struggling to write short or long texts. It’s a voice typing app used by millions of users.

The app is pretty accurate as it uses Google’s speech recognition service. It automatically recognizes many verbal commands for punctuation, new line, etc. 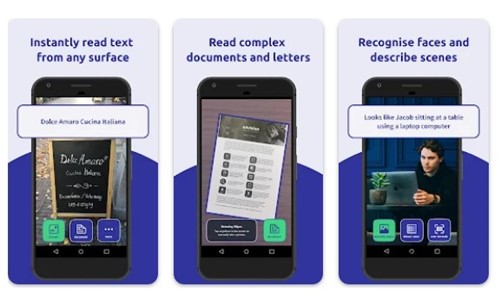 Well, Envision AI is one of the best and most handy accessibility apps to have on Android. This one is an OCR app that speaks out about the visual world.

The app could be beneficial to blind and visually impaired users as it helps them by narrating the things happening around them. To use this app, the user needs to point the phone’s camera to the objects, and the app will automatically narrate it.

Since the app comes with OCR support, it can read documents, handwritten notes, scan barcodes, and more. Overall, Envision AI is an excellent accessibility app for Android. 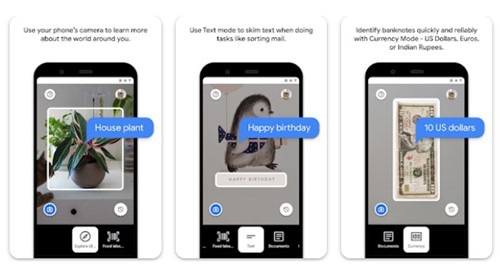 Well, Lookout is very similar to the Envision AI app that has been listed just above. The app is designed to help people with low vision or blindness by informing them about the world around them.

Google itself backs the Android accessibility app, and it uses the phone’s camera & sensors to recognize objects and text and tells you what it finds.

Currently, the app is available in more than 20 languages and only runs on Android version 6 & above.

So, these are the best and most useful accessibility apps for Android. If you have a disability, you can use these apps to make your life easier. If you think we have missed any important app, let us know in the comment box below.