Last month, Samsung has brought Android 11-based One UI 3.0 beta version for Samsung Galaxy M31. And now finally the device has started receiving the stable update of Android 11. Galaxy M31 is the first mid-range smartphone to get a One UI 3.0 update.

Samsung Galaxy M31 Gets Android 11-Based One UI 3.0 Update 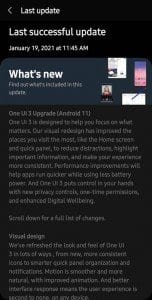 The Samsung Galaxy M31 was launched in February 2020 with Android 10 OS. However, now the phone has got a stable update of Android 11 with all-new UI features. According to the post on the Samsung Community forum, the software update is available in India. With the new update, the users can add a call background to see a picture or a video whenever you receive or make a call.

Earlier, the Android 11 software update was rolled out for Samsung S-series, Note-series, and Fold-series smartphones.

The community forum has shared screenshots of the update for M31 in India. The update is out and will reach all the users in the coming days or weeks. Android 11 One update has three versions M315FXXU2BUAC, M315FODM2BUAC, and M315FDDU2BUAA and it shows January 2021 Android security patch. It has a download of about 400MB.

All the Indians have started receiving the Android 11 update on the Galaxy M31 device. Check out what’s new with the update.

The community forum has also said that some of the apps need to be updated separately once the user installs the One UI 3.0 update.

How to update Samsung Galaxy M31 to Android 11?

If you have not received any notification for the update then follow the steps:

If your phone has not got the update then you need to have patience, you can get it in the coming days.