Tech Viral
Home News Gadgets Android O Will Be The Last Major Update For The OnePlus 3... 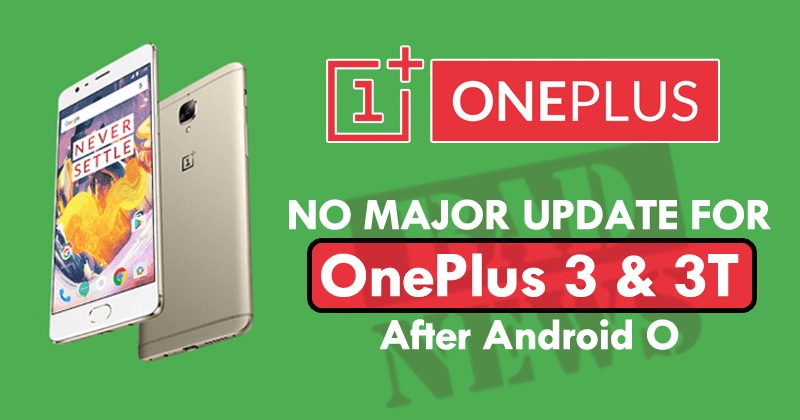 The OnePlus 3 and 3T will die with Android O only. It is something that has confirmed the OnePlus itself, which delimits that Android 8.0 will be the last major update that will receive these devices.

Bad news for the owners of the OnePlus 3 and 3T, as we already know the quality of the update policy of OnePlus, and it is still more than debatable. I personally suffered the same issue with Android M and OnePlus X, and users of the OnePlus 2 received the kick knowing that they would not receive Nougat when the company promised that it would. Of course, the story repeats itself to some extent: OnePlus has confirmed that the OnePlus 3 and 3T will die on Android O.

According to the Chinese company itself, these two devices will receive Android O as their last major update. They also talk about security patches, and we are quick to say that they are not very flattering words.

It will not be for technical specifications since the two models are more than capable to support Android P (although it is obvious that they will receive it by the community).

Due to the controversy generated by the OnePlus X and OnePlus 2 update policies, and the recent release of OnePlus 5, many users in OnePlus forums have agreed to ask the company certain questions, including Why OnePlus 5 has received many more updates than its “small” brother, the OnePlus 3/3T. The leader of the OnePlus product section, Oliver, has responded and what is clear is that Android O will be the last major update for the OnePlus 3 and 3T.

Oliver comments that when a new device is released the software team devotes one or two months to solve the bugs or glitches in that phone. It is reasonable to think that. Being the OnePlus 5 its most recent phone, it spends more time at the level of updates. They have also specified that the August patch has been delayed due to the OxygenOS 4.5 update. The problem comes in the shortcomings that will suffer the OnePlus 3T.

To begin with, the new OnePlus 5 gestures and the DCI-P3 screen calibration will not reach the OnePlus 3 and 3T due to “hardware differences”. The bad news comes with the last question: How long will the software support the OnePlus 3 and 3T? The answer is that Android O will be the last major version update that will receive these phones. On future security patches, shortcuts are shown: “They will continue for the foreseeable future.”

So, what do you think about this uncanny news? Simply share your views and thoughts in the comment section below.