Did you know that the company led by Tim Cook is well known as Apple has registered a patent for a foldable iPhone with the flexible display. The company has for years been actively studying a hinged iPhone format, with designs calling for a flexible metal-backed OLED display capable of being folded in half.

Now forget about the smartphones without frames, double cameras, or Face ID. Now the fashion that seems to be imposed in 2019 has folding screens as protagonists. So we have seen in the new ZTE Axon M and what appears to be the first folding smartphone. But now after the South Korean giant Samsung and ZTE, the tech giant Apple also seems to be preparing a folding iPhone and could present it in the coming months.

This is how the latest Apple patents discovered on the Internet seem to show, leading many to imagine that the future of the iPhone may be in folding technology. months ago we have already heard how the tech giant Apple is working with LG to create OLED screens, but these would not be ready for two or three years.

The Samsung Galaxy X, however, it seems that it is already in production because the smartphone already has a support page on the website of the brand. Its design would be similar to that of the ZTE mobile we referred to above but one of the two panels that will give life to the mobile would be flexible, making its use more comfortable.

Precisely, both phones come to mind when we see the schemes that appear in the patent for this possible Apple folding iPhone, which we have only a few sketches to imagine what the mobile could be.

News on the iPhone of the future

The recently announced iPhone X presents a significant design change for Apple, including a screen without bezels, a front camera capable of reading our face, a new OLED screen and the removal of the start button. It makes sense for Apple to think about the next design leap, and folding screens can be the way the brand goes from here on out. But do not fear, it is still to be expected that we will have two or three generations of iPhone imitating the lines and shapes of the current top of the range of the brand. 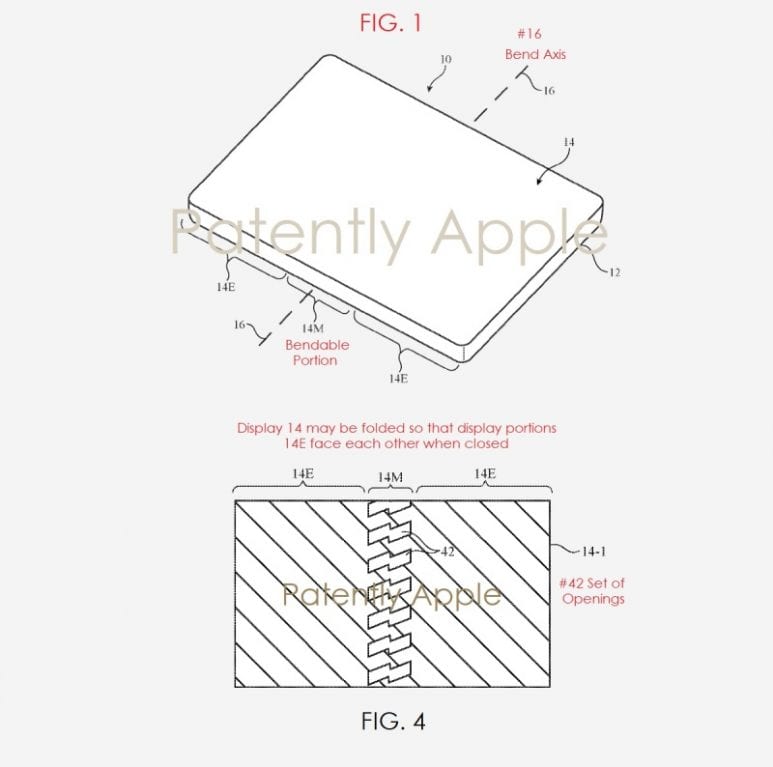 As we can see in the images that accompany this article, we can intuit that the future folding iPhone of the American company, at the moment is not very different from what we already know. The scheme shows two screens separated by a hinge that would turn the smartphone into a compact terminal. It is expected that only screens are shown on the one hand, but these sketches do not show more details.

At the moment it seems that we will have to wait a long time to see an iPhone of this type unless the brand gets the batteries.