The first update as a review of iOS 11 is already here. The tech giant Apple has just released the OTA update iOS 11.0.3 in order to begin the process of optimizing the system and adapting to the hardware of all compatible iPhones and iPads.

The tech giant Apple just specified that it has focused on correcting and optimizing iOS 11, so, for now, we do not know if this new version will improve the poor autonomy data released so far by the new version of iOS.

It was on September 19 that the tech giant Apple released the new iOS 11. Unlike its rival the tech giant Google’s Android (and it’s not the fault of the search company), as the tech giant Apple’s update system works very well and to prove such a scenario is the fact that iOS 11 is already installed on 47% of devices even beating iOS 10.

The data comes from the company Mixpanel and show that the rate of adoption of the new iOS 11, which came out about 3 weeks ago, has already exceeded that of iOS 10. In terms of numbers, iOS 11 now has a rate of adoption of 47.5%, while iOS 10 is 46%. Only 6.5% of the tech giant Apple’s devices are still running iOS 9. 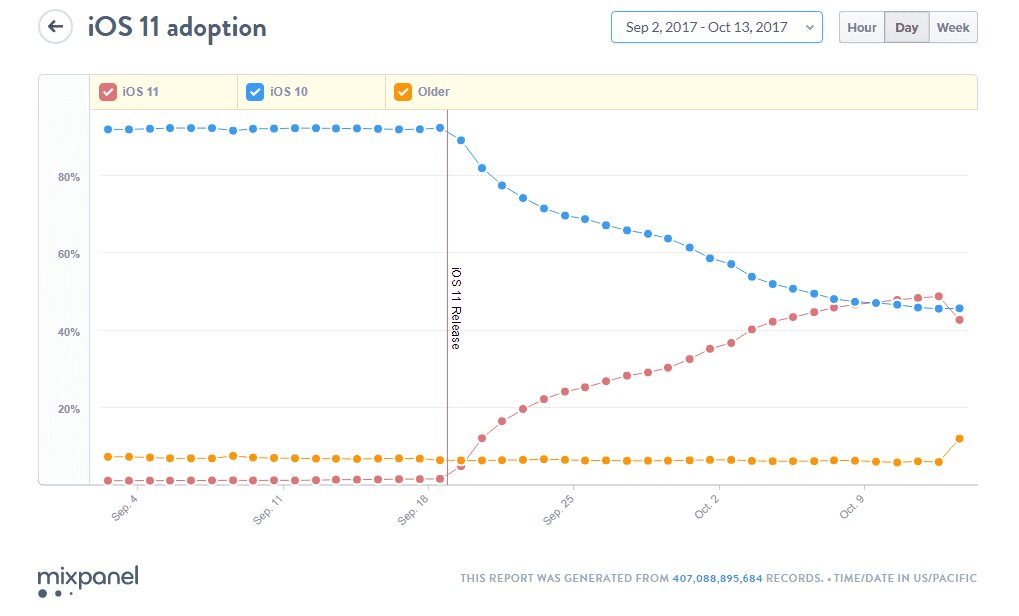 As for the numbers, the adoption of iOS 11 has been slower, compared to what happened when iOS 10 came out. According to the company Mixpanel, it took only two weeks for iOS 10 to exceed iOS 9. In the second week iOS 11 was only installed in 38.5% of the devices (within 24 hours the adoption rate was 10% and at the end of one week the iOS 11 had an adoption rate of 25%).