The next iPhone (iPhone 8) is effectively eliminating bezels, but what if I say that the iPhone 8 is also preparing to ditch its iconic home button along with the current Touch ID fingerprint recognition technology used in iPhones. Yes, it’s true.

This year the tech giant Apple will celebrate the 10th year of the launch of the iPhone. The iPhone 8 should be the next smartphone of the tech giant of Cupertino and expect a lot of news at the device level but also within the ecosystem itself.

Recently, we’ve talked about the possibility of the iPhone 8 undergo changes at the visual level, and now there is another rumor to support these suspicions.

In addition to saying that the screen of this new iPhone may be “5.8” OLED and not have the usual frame, we are now talking about changes in the area of the home button characteristic of the brand of Steve Jobs. This button is expected to be replaced by a functional area where virtual buttons will be displayed as well as new biometric technologies to replace the Touch ID.

Earlier this week an Apple patent hinted that the brand found a way to incorporate a fingerprint reader into the smartphone screen, thus making it no sense to keep the main button with its Touch ID function. The KGI Securities analyst, Ming-Chi Kuo believes that this is the direction that the brand will give to its next device.

Retreating until September, we remember rumors that Apple would remove the bottom of the iPhone and move to a full-screen, end-to-end.

Apple can also pick up on everything it has learned by introducing the Touch Bar in the new MacBook Pro and letting this new functional area fit the application that is currently in use. 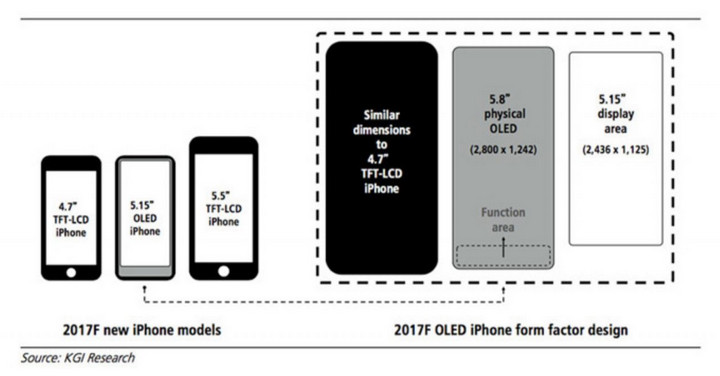 As for the screen is expected to be 5.8″, however, Kuo suspects that the screen area is reduced to 5.15″ due to the virtual buttons. However, the iPhone 8 will be smaller than the iPhone 7 even though the screen is larger.