Tech Viral
Home News “How To Become A Successful Person Like Bill Gates”: According To Bill... 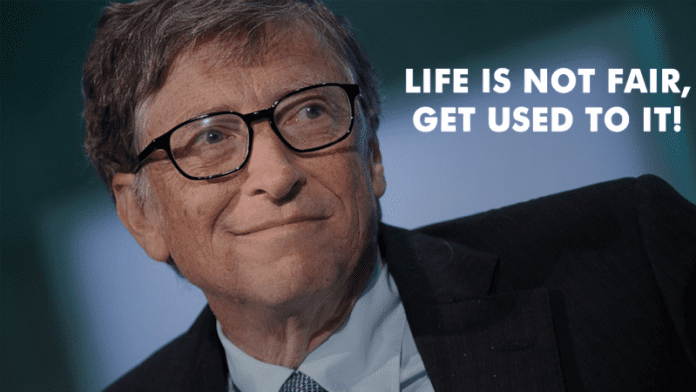 Bill Gates is undoubtedly the most successful people the world had ever seen. If you want to become successful in life, then you can easily look up to people like Bill Gates and Steve Jobs.

“How To Become A Successful Person Like Bill Gates”: According To Bill Gates

Well, we all know that a smart idea can transform the whole world. What are the ingredients needed to be the richest man? Well, a smart idea, hard work, and dedication might be enough for you. However, if we talk about the successful person, Bill Gates is undoubtedly the most successful people the world had ever seen.

Well, Bill Gates who was Born on October 28, 1955, is an American Business magnate, entrepreneur, philanthropist, investor, and programmer. He co-founded Microsoft, which is right now the world’s largest PC software company.

If you want to become successful in life, then you can easily look up to people like Bill Gates and Steve Jobs. Well, Bill Gates once dreamed of putting the personal computers on every desk which he already achieved. However, the question is what made him a source of continuous inspiration for the past four decades?

Well, according to Bill Gates, he got a useful advice from Warren Buffett. Warren Buffet taught him how to say NO. It becomes difficult to say NO to our closed ones. However, if you learn to say no, then you can ignore any unnecessary activities and focus your attention on the right places.

Be Confident and dominate! Well, if you are going through challenging roads, the world becomes a place where optimism is very rare. Bill Gates appreciates the value of optimism.

“Your most unhappy customers are your greatest source of learning”- Bill Gates said that they even have the poster of this quote in their office. Bill Gates advises us to embrace criticism. If you start to embrace the criticism, you will know the areas that need improvement.

Well, often successful people thinks that they can’t lose. However, the wise people know that failures are just lessons that will make them stronger. Therefore, if you already achieved success then you also must remember the expectation of failure.

Bill Gates also shared an important trait of successful people, that is the will to learn. Bill Gates once said that he loves his job because it is full of challenges and needs constant learning.

Bill Gates once told Playboy in 1994 “I like being around smart people who are trying to figure out new things. I like the fact that if people try they can figure out how to invent things that have an impact. I don’t like to waste time where I’m not hearing new things or being creative,”

So, people who want to be successful can take these points as a guide. This thing needs to be implemented in our daily life. So, what do you think about this? Share your views in the comment box below.