Well, we all love to have a party with our dear friends and family. On Parties, music is important, and it makes everything more enjoyable. However, imagine a situation where you were partying with your friends, and due to a sudden power outage, the speakers went silent.

These little things can actually ruin the entire day because everyone loves music while partying. We all have no other option left apart from just waiting for the power to kick in. But, since we all have a smartphone, we can utilize our devices to sync music and amplify the volume.

There are some of the best Android apps available on the Google Play Store which allows users to sync music on multiple devices. By this way, the same music will play on various devices at the same time to amplify the volume.

So, here in this article, we are going to share few Android music sync apps that you can use to stream music across a number of mobile devices, to amplify the effect. So, let’s explore the best music sync apps for Android.

Rave is one of the best apps that’s available for Android and iOS devices. The best thing about Rave is that it can stream media from various popular sites like NetFlix, YouTube, etc. Not just that, but Rave also got the ability to play media files stored on cloud storages like Google Drive and Dropbox. Rave allows users to stream music files with your friends to create a speaker system. The feature doesn’t end here as Rave also offers a built-in messaging app that you can use to chat with your friends.

Chorus is another interesting Android app that allows users to sync music over multiple devices. The app relies on the Bluetooth to sync music across the devices. You just need to create an account and invite your friends to join you via Bluetooth. Once joined, the app allows users to sync music files that are locally stored. The app is free to use, and it doesn’t show any ads. But, it’s a little bit buggy, and you can expect a few crashes during the music sync. So, Chorus is another best music sync apps that you can use right now.

SoundSeeder is one of the most popular music sync apps that you can use right now. The best thing about SoundSeeder is that it offers a Party Mode which plays music simultaneously and in sync with your friends to boost the volume. The app relies on the WiFi network to sync music across different devices. The app is massively popular amongst Android users, and it’s right now used by thousands of users from all across the world. So, SoundSeeder is another best music sync app that you can use on your Android smartphone.

AmpMe is another best Android app on the list which you can use to sync music across other devices. The best thing about AmpMe is that it can stream music from various music streaming apps like YouTube, Deezer, SoundCloud, Spotify, etc. However, you need to sign in with Google or Facebook account to connect with your friends. The app is available on the Google Play Store, and it received lots of positive ratings. So, AmpMe is another best app which you can use to sync music across multiple devices. 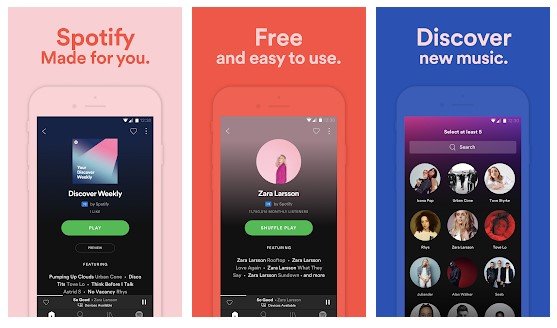 Spotify has a feature called Spotify connect that connects all your Spotify devices. Once connected, you can control the music playing on your another device. So, basically, you can use Spotify to sync music on your other Android, iOS, Windows, or MacOS device.

So, these are the five best music sync apps for Android that you can use right now. If you know any other apps like these, then make sure to drop the name in the comment box below.