Modern apps have all kinds of practical applications, but their best uses may still be for entertainment. We’ve written about apps for enhancing the music experience on a mobile device, apps for gamers, etc. And here we’ll cover another aspect of personal entertainment: sports consumption.

There are several apps that are essential for the modern sports fan, from those that provide news and data to those that simulate action in game form. These are 10 of the best. 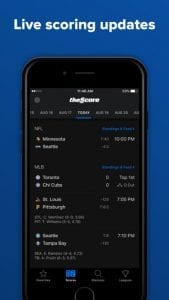 There are a lot of sports apps out there that will provide basic scores and updates for major teams and leagues. But a lot of them (some of which we’ll cover below) are connected to huge companies and are packed with additional content. If you want a very simple, clear, and up-to-date app for scores, headlines, and nothing else however, theScore may be the one for you. It’s beautiful in its simplicity, even if it doesn’t have some of that additional content. 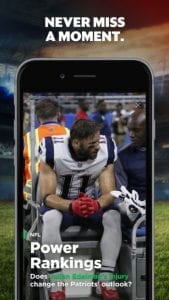 Some of us do want those added features from larger companies, and in this sense Yahoo Sports is one of the better comprehensive sports coverage options. A review at The Sweet Setup called it the best overall sports app for iPhone just last year, and while there are worthy alternatives (as the review acknowledged), it’s hard to argue that something else is definitively better. It’s true that theScore might be best for simple scores and updates, but Yahoo is a big, clean, high-powered app that allows you to catch a great deal of written content, highlights, and even live sports action. 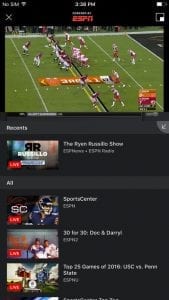 This is the last of the full-fledged news and scoring apps we’ll cover. ESPN is another competitor for Yahoo Sports, and frankly it may just depend on which one you’re more familiar with whether you like one or the other. The key perk to ESPN, however, is that if your cable subscription includes ESPN, you can log in to watch a huge number of games through your mobile devices. 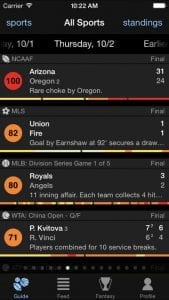 This is a little bit of an up-and-comer, or at least it appears to be generating more attention of late. Thuuz is another app that allows you to follow your favorite teams and leagues for a customized experience and personalized updates. But it has a few additional, quirky features that make it worthwhile even if you’ve picked one of the apps above for news and updates. Thuuz recognizes the games you’d like to watch and tells you where you can do it, whether through your cable network, an app, or at a sports bar. It also creates “excitement ratings” to tell you when a game is particularly exciting and requires your attention. 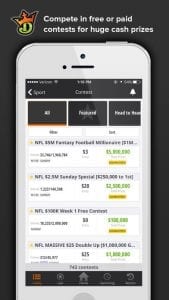 If you’re the type of sports fan who likes to play along with the action, this is a must-have. DraftKings has become the go-to daily fantasy app, offering a gigantic number of contests for you to enjoy in whatever sport you choose. You just pick a contest, pay an entry fee if it’s not free, pick your lineup, and hope that you perform well enough to win a payout. DraftKings is particularly interesting in 2017 given its brand new Pick’em format, which came out recently and introduced a new way to play daily fantasy. It’s simply the most comprehensive daily fantasy sports app. 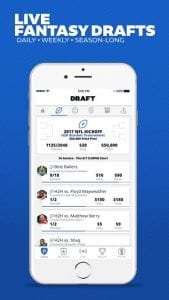 While DraftKings is the unquestioned leader in the daily fantasy category (given that it is now linked to FanDuel), Draft is perhaps the most interesting alternative. It’s another daily fantasy app, but one that’s quite different in practice. Rather than picking lineups in a salary format (as you do in DraftKings) or via the new Pick’em concept, Draft users enter into “snake drafts” in which they pick players in order. The app claims that this gives you a higher probability, by a fairly significant margin, of winning contests. 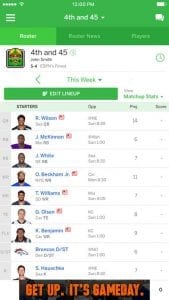 If ordinary fantasy sports are your thing, rather than daily fantasy, this is another app to consider. The main alternative is probably Yahoo’s fantasy app, and in large part you may pick one or the other based on where your friends or family want to have a fantasy league. But this is a particularly worthwhile app in that it also provides access to other ESPN games, such as “Streak for Cash” and “Pigskin Pick’em,” both free games that fans often enjoy. 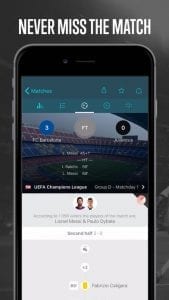 Some of the apps at the top of this list – perhaps all of them in fact – will give you news on professional soccer (or as this app refers to it, football). However, you kind of have to dig for it. Because those apps are for all sports and come from U.S.-based companies, they tend to prioritize American football, basketball, baseball, etc. Forza Football is a lot of people’s go-to for scores, highlights, and updates from the world’s most popular sport. It covers over 500 leagues around the world. 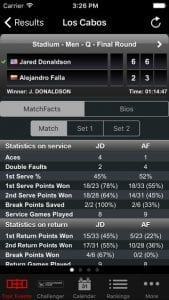 Similar to world football, tennis often goes more or less uncovered on larger sports apps – or at least you have to dig for the coverage. ATP/WTA Live gives you easy access to all current tennis scores, as perhaps the easiest method out there for following international tournaments. One review pointed out that the app could be better if they added future and past tournament information; there really isn’t much in the way of news or journalistic content. But for pure score tracking it’s a must-have for tennis fans. 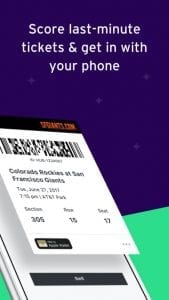 Finally, this is one of the go-to apps for actually attending sporting events. StubHub has a huge user base of sports fans buying and selling tickets, to the point that it effectively represents the entire market. There are other, similar services out there, but StubHub is the most firmly established, and perhaps the easiest to use in app form.