Tethering and hotspots are the most used means of connections which we use on daily basis. These two connections are mostly used when we want to share internet connection with other devices. So, in this article, we have compared both Tethering and Hotspots.

Contents show
Difference Between Tethering & Hotspot: Which One Is Better?
What is Tethering?
What Are Hotspots?
So, what’s the difference between Hotspot and Tethering?

Difference Between Tethering & Hotspot: Which One Is Better?

Well, out of all those, tethering and hotspots are the most used means of connections which we use on daily basis. These two connections are mostly used when we want to share internet connection with other devices. So, in this article, we will be comparing both Tethering and Hotspots. So, let’s know the significant difference between both of the connection. 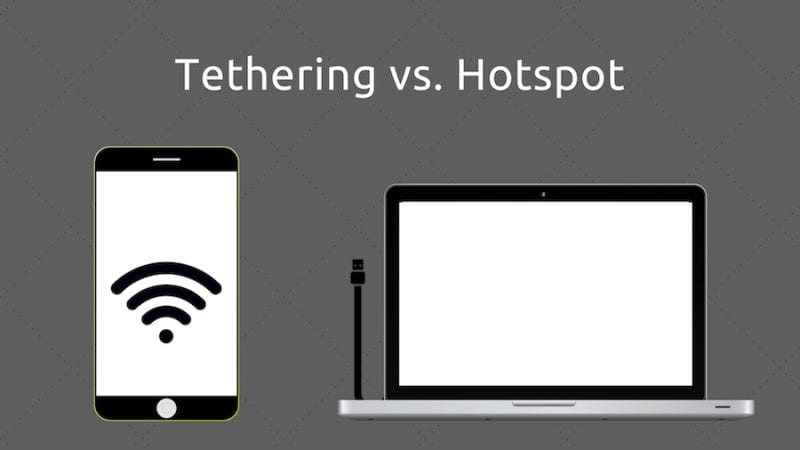 Tethering is the process through which we can access the internet on our computer or other devices through another computer or smartphone with cellular network capability. In short, tethering means sharing internet between devices. You can choose from various means of tethering to share your internet connection including WiFi, Bluetooth Tethering, or through USB tethering.

You will find hotspots in public location where anyone can connect their devices to access the internet. Devices like smartphones, routers, and your computers act as WiFi hotspots. On smartphones, you can use the mobile hotspots to share your internet connection with 4-5 devices.

So, what’s the difference between Hotspot and Tethering?

There’s a considerable difference between Hotspot and tethering. Not everyone can connect to a tethered connection, on the other hand, everyone can connect to a Public hotspot. However, WiFi hotspots look more convenient compared to tethering. WiFi hotspots don’t need any other apps installed on your computer or another device to share the internet.

Moreover, with WiFi hotspots, you can connect as much as five devices without any issue. However, on tethering, you may need some external tools or device drivers for sharing the internet. But, Tethering consumes less battery compared to hotspots.

On the security front, WiFi hotspots are more vulnerable to hacking attempts. There are several tools available on the internet like WiFi sniffer which can intercept the internet traffic. Moreover, Wifi hotspots are more prone to brute force attacks or dictionary attack. Any trained hacker can easily break into networks that fail to implement proper encryption standards.

So, if you have a WiFi hotspot, then its highly recommended to set a strong password and to use the latest security protocols like WPA2.

So, these are the major difference between tethering and hotspot. So, did the article help you to clear your questions on tethering vs. hotspot? Share your opinion in the comment box.