According to the latest reports, recently, Tesla CEO, of course, Elon Musk was charged with fraud and sued by the SEC, the US Securities and Exchange Commission, on suspicion of manipulating Tesla’s share price. According to the complaint, he lied when he tweeted that he had “secured financing” to withdraw the company from the stock exchange. The CEO says this is an “unjustified action.”

Contents show
Tweet from Musk is “False and Misleading”
Elon Musk may have manipulated the stock price
SEC tried to compromise, but Elon Musk refused

Elon Musk was charged with fraud and sued by the SEC, the US Securities and Exchange Commission, on suspicion of manipulating Tesla’s share price. According to the complaint, he lied when he tweeted that he had “secured financing” to withdraw the company from the stock exchange. The CEO says this is an “unjustified action.”

The SEC wants Musk to be fined, without specifying a value; and wants to prohibit him from acting as director or CEO of a public company. Tesla shares are down 12% this Friday (28).

On August 7, Elon Musk published a tweet saying that he intended to withdraw Tesla from the stock exchange and that it had secured financing to buy TSLA shares for $420 each.

However, the most strange thing is that the US Securities and Exchange Commission (SEC) says he lied. “Musk had not even discussed, let alone confirmed, the key terms of the deal, including price, with any potential source of funding,” write the prosecutors in the complaint.

“Musk knew he had never discussed a private transaction at $420 per share with any potential funding source.” So the SEC says the tweet saying “secured funding” is “fake and misleading.”

Days later, Elon Musk explained that a sovereign fund of Saudi Arabia would be involved in the repurchase of shares. So he gave up the idea on August 24, claiming that money was no problem; however, the transition would be very time consuming, and shareholders indicated they did not want Tesla to close capital.

The CEO, of course, Elon Musk calculated the price of $419 by adding a 20% premium on the quotation for the day and decided to round it off to $420 to make a reference to marijuana. He “thought his girlfriend would find it funny, which admittedly is not a good reason to choose a price,” the SEC writes.

Elon Musk may have manipulated the stock price

The suspicion is that Elon Musk wanted to manipulate the stock price to harm short sellers, that is, investors who bet against a company. The SEC notes that $13 billion in Tesla shares are in a “short” position. The CEO has been making a number of criticisms of these investors on Twitter.

An e-mail to the Tesla board reinforces the idea that Elon Musk would be manipulating stock prices. He wrote on Aug 2 that having publicly held “subject Tesla to constant defamatory attacks by the short selling community, resulting in major damage to our valuable brand.”

On Aug 7, when Musk announced “guaranteed financing,” Tesla’s stock went from $341 to $380. This high sell-in loss to short sellers, who only make money when the stock falls. The SEC says that Musk’s misleading tweets led to a “significant market break” and ultimately hurt its shareholders – the price is currently at $270. 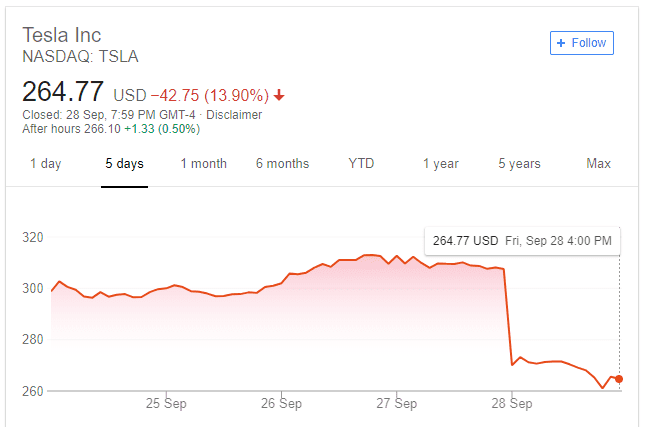 According to the Wall Street Journal, the SEC wanted to make an out-of-court settlement and publicly announce it last Thursday. However, the CEO’s attorneys called the agency at the last minute saying they “were no longer interested in pursuing the deal” because that would “not be sincere” for Musk, a source tells CNBC.

In a statement, Musk says that “this unjustified SEC action makes me deeply sad and disappointed, integrity is the most important value of my life, and the facts show that I have never compromised it in any way.”

Also read: How To Extract And Copy Text From Any Image In Android

Tesla’s board of trustees also came out in defense of the CEO, saying they have trust “in Elon, his integrity and leadership, which has resulted in the most successful US auto company in more than a century.”

The SEC has already prevented other executives from acting as director or CEO in publicly traded companies: this is the case of Elizabeth Holmes, founder of Theranos, also accused of fraud.

If that punishment were even applied, that would be a problem for Tesla and other companies, such as SpaceX and Boring Company: they could only debut in the stock market without Musk as CEO. So, what do you think about this? Simply share all your views and thoughts in the comment section below.