Announced in December 2017, the Snapdragon 845 is the chip that will be integrated as a heart of many of the most sophisticated smartphones of 2019, including the Galaxy S9. No handset equipped with the novelty has been released yet, but Qualcomm has provided reference smartphones (built specifically for testing) with the Snapdragon 845 to specialized means. Well, the first benchmarks have already come out and left quite positive impressions.

We will explain everything you need to know about Snapdragon 845 here, but to summarize, the new chip promises 30% more graphics performance compared to the previous generation, 25% speed in heavy applications, reduction of up to 30% in the consumption of energy and more features for artificial intelligence thanks to advances in the Hexagon 685 Digital Signal Processor (DSP).

In the overall performance test (considered CPU, GPU and RAM) performed by Android Police with AnTuTu, the Snapdragon 845 was ahead with more than 265,000 points while the second placed, the Huawei Mate 10 Pro (with Kirin 970 processor), registered almost 214,000 points. This suggests that the new chip can even be faster than the previous generation in processing, although this does not mean that the user experience will improve at the same rate.

The graphical improvements of the Snapdragon 845 brought by the GPU Adreno 630. The tests conducted by AnandTech showed the chip achieving 3DMark Sling Shot 3.1 Extreme Unlimited performance up to 32% higher than the Snapdragon 835 of the Pixel 2 XL and the Galaxy S8, for example. The Snapdragon 845 managed to beat even the iPhone X with its Bionic A11 chip in some graphics tests. 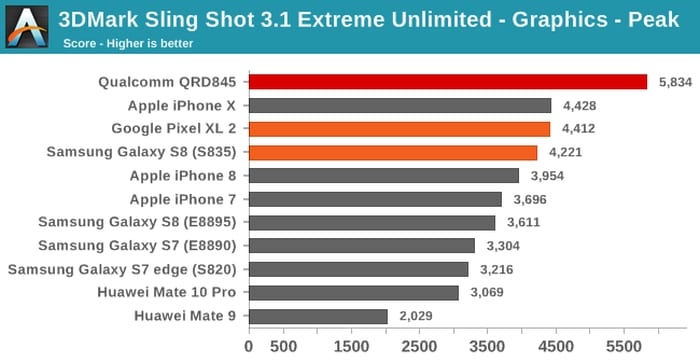 In the evaluation of Tom’s Guide, iPhone X scored higher on overall performance benchmarks, but the device with Snapdragon 845 achieved higher numbers in graphical tests: there were 5,964 points in the OpenGL ES 3.0 test of 3DMark versus 3,998 of the device’s Apple. In the OpenGL ES 3.1 test, however, iPhone X recorded 4,994 points; the reference apparatus, 4,389.

Obviously, the results will be more accurate when the first Snapdragon 845 smartphones will hit the market. With them, it will even be possible to evaluate the behaviour of the chip with activities of artificial intelligence, a difficult task to do with benchmarks because there are no standardized tests currently.

It will not be long: the Galaxy S9 will be officially announced on the 25th. However, the manufacturers like Sony, LG And Xiaomi will be able to launch devices with the Snapdragon 845 by the middle of the year, of course, 2019.