Recently, with the arrival of the Samsung Galaxy S9+, the Korean brand, of course, Samsung introduced great news in photography, which raised the bar on quality. Yes, according to the latest reports, the South Korean giant Samsung’s flagship model, Samsung Galaxy S9+ managed to beat iPhone X and Pixel 2 in the DxOMark.

With the arrival of the Samsung Galaxy S9+, the Korean brand, of course, Samsung introduced great news in photography, which raised the bar on quality.

To prove the evolution of this model, DxOMark has now presented the result of its test, where it puts this smartphone at the top of the leaderboard.

In recent years we have witnessed a great technological evolution in smartphones. The processors are increasingly powerful and efficient, the RAM is increasing and the camera has an increasing quality.

With the recent arrival of the Samsung Galaxy S9+, we witnessed a great qualitative leap in the photographic department. With two rear cameras, one 12 MP with F/1.5-2.4 aperture and another 12 MP with telescopic photography, this is probably the best mobile camera on the market.

Samsung Galaxy S9+ has the best camera on the market

With the constant evolution of the photographic capacity of smartphones, it is often difficult to define which device has the best camera. There are several models that try to stand out in the middle of this market, however, few are those that really reach the top.

With the launch of the Samsung Galaxy S9+, the Korean brand quickly highlighted the photographic evolution of its smartphones, something that has now been confirmed by DxOMark. 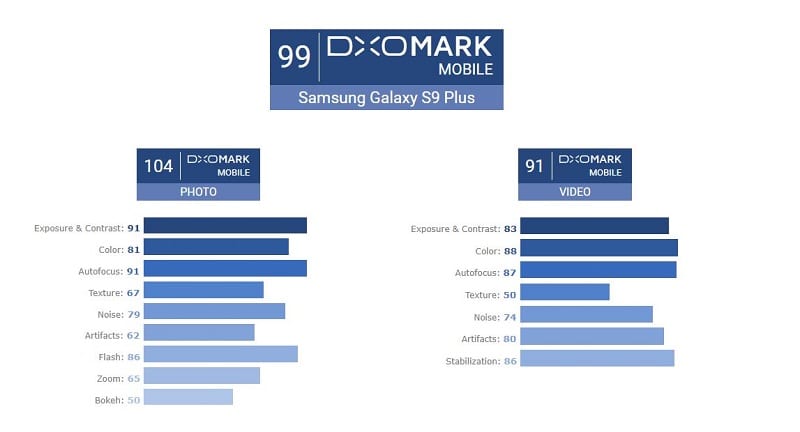 According to the analysis developed around since device, the Samsung Galaxy S9+ totalled 99 points (vs 98 of Pixel 2 and 97 of iPhone X) in the overall result and 104 points in photography (vs 99 of Pixel 2 and 101 of iPhone X). Although the quality is very similar between the models compared, DxOMark highlighted good noise control, detail quality, speed and efficiency of autofocus, vivid colour and telescopic photography capabilities.

Already in the video, the score of Samsung Galaxy S9+ is 91 points, being able to position at the top of the table, just below the Pixel 2.

The iPhone X ranked first, followed by other Apple models. The first Android device comes in fourth with the Samsung S8+, followed by the Samsung Galaxy S8 and Note 8, in 7th and 8th position, respectively.

The 10 best cameras in smartphones according to the Consumer Reports:-

Although both studies point to contrary positions, the truth is that the smartphone cameras are increasingly developed and with an increasing quality.