As we all know about Google very well and the company like Google can’t compromise with its users’ privacy. So, Google is trying to secure its users from the invasion by the Government hackers and alert you if you are being attacked by the Government Hackers.

Contents show
Google Alert For The Invasion By Government Hackers
This is how the message looks:-

Google Alert For The Invasion By Government Hackers

Google announced on Friday that they are reshaping the message displayed to the users for the risk of invasion by the government hackers. Although this is not a problem that most users have to deal with, the notice may be useful for journalists, activists or officials of other governments.

Google always defend Internet users whenever a government hacker tries to break into your accounts. However this procedure occurs for some time, but the search giant Google wants to make even clearer when an attacker who works for the authorities are looking for personal information of ordinary citizens. Whenever this happens, the user will see a big message on the screen indicating that hackers backed by the government may be trying to steal your credentials from the web.

Here is the message they show to the users to alert: “There’s a chance this Is a false alarm, but we believe that Government-backed hackers may be trying to trick you to get your Google Account password. We can’t reveal the tip-off because these attackers will adapt, but this happens to less than 0.1% of all Gmail users. If they succeed, they can spy on you, access your data, or do other activities.”

This is how the message looks:- 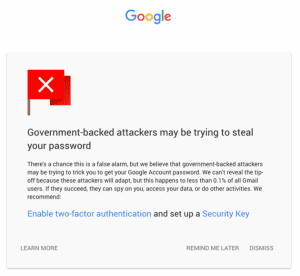 According to Shane Huntley, from Google’s security team, and Jonathan Pevarnek, Software Engineer of JigsawTeam (subsidiary of Alphabet, Google owns), “This warning is more a way to use technology to tackle the toughest Geopolitical challenges, fighting violent extremism, to stop online censorship and to reduce the threats associated with digital attacks.”

Google believes that the message can be especially useful for the people who work in occupations like, journalists and top executives of major corporations, as well as activists and government officials in other countries. As they are the common targets for any hackers.

To enable two – step verification for your Google Account, you must access this page . In the “Two – step verification” on the right, select Start configuration and complete step by step to complete the process. When finished, you will be redirected to a new site on which you will need to review your settings and add alternate phone numbers. After that, next time you log in, you will receive an SMS with a verification code from Google to access your account.