According to the latest reports and recent studies, the tech giant Google’s well-known personal virtual assistant, of course, Google Assistant is much smarter than its rivals and simply managed to beat its rivals as well, hence, leaving Alexa, Cortana and Siri behind.

Virtual assistants are a reality today and day by day also increasing its presence in our daily lives. They provide unique support to users and streamline the actions they want to repeat or schedule.

Of course, all of them are based on a high degree of artificial intelligence, the greater it is, the more it can be obtained from these virtual aids. A recent study showed that the tech giant Google Assistant continues to be the smartest among all the well-known virtual assistants, of course, Siri, Cortana, and Alexa.

The tests carried out sought to obtain information about which of the virtual assistants can give more to the users, either through the understanding of the questions posed, through the answers given and their degree of correction.

Also read: How to Secure Your Private Browsing with a Password on Android

The results are clear and show an evolution in all the assistants and their abilities. Compared to the tests carried out one year ago, Google Assistant again stands out with 100% understanding of the 800 questions placed, followed closely by the others.

Regarding the correction of answers, the difference is greater among virtual assistants, again with Google Assistant highlighted, 85.5%. Curiously in this class, Alexa manages to stay above Cortana, with 61.4%. While the tech giant Microsoft’s Virtual Assistant, of course, Cortana had 10 questions which were not understood by it. 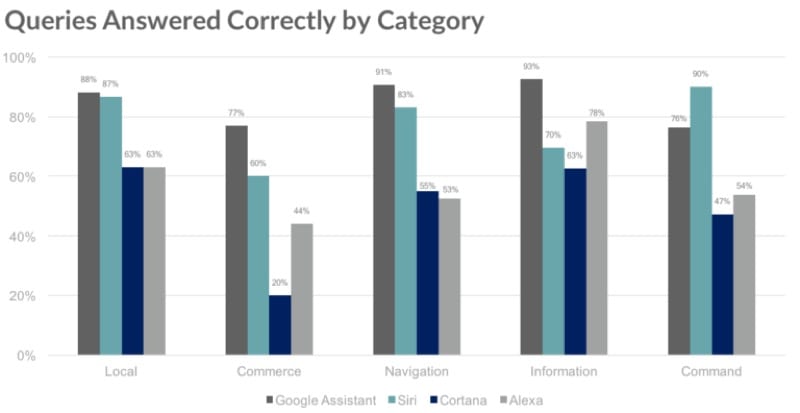 It is, however, interesting to see that when questions are associated with categories, the right response levels are lower and are not controlled entirely by Google Assistant. It’s in the Commands class that has lower values, being overtaken by the tech giant Apple’s Siri.

These are impressive values since we are talking about artificial intelligence and understanding of the issues presented. It is also important to highlight the quality of the responses given, which also show that these are increasingly prepared to be used without limitations day by day.