The tech giant Google and Huawei have colluded to launch HiKey 960, a high-end mini-PC that has the capabilities to run both Android and Linux operating system. Even, it is an officially approved Android reference board that can be used to code software for ARM-based systems.

What if I say that this Android board has octa-core processor and 3 GB of RAM? Obviously, it will sound like I’m talking about a smartphone, right? The result of a partnership between the tech giant Google, Huawei, Archermind, and LeMaker, “HiKey 960” is a card that has all these features. The device resembles Raspberry Pi, but goes much further, both in terms of performance and price.

To be exact, the HiKey 960 is equipped with the Kirin 960, Huawei’s chip composed of four Cortex-A73 processor which is clocked at 2.3 GHz and four Cortex-A53 (with less performance) processor which is clocked at 1.8 GHz. While it has the GPU Mali-G71 MP8 and 3 GB of RAM (LPDDR4). While if we talk about the storage then it has 32 GB of UFS 2.1 memory for internal storage and not only that even it is expandable with microSD card up to 2 TB. 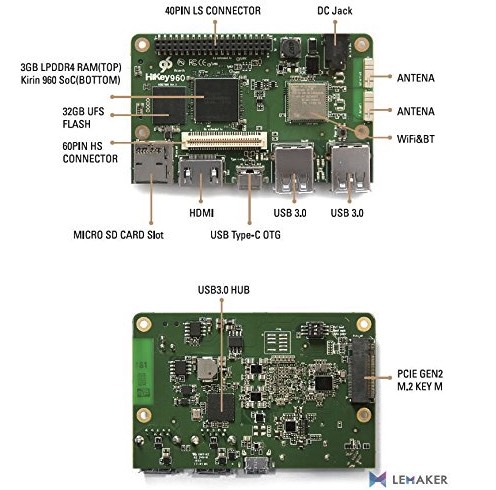 But the goal here is not to tackle Raspberry Pi and other boards like this. Of course, you can employ HiKey 960 on a wide variety of projects, but the device was actually designed to make it easier for developers to create Android software – the board is compatible with the Android Open Source Project (AOSP) with Linux kernel 4.4.

Here’s the reason for such a high price (compared to the Raspberry Pi 3, at least it costs $ 35). The HiKey 960 will cost $ 239 in the United States. The official launch is scheduled for May 2017. However, there is no availability forecast in India, but the product can be shipped to the country with some extra shipping cost.

So, what do you think about this new high-end board? Simply share your views and thoughts in the comment section below.