It’s been almost 9 years since Google released the first version of Android, but since then there has been a growing problem. However, recently, the tech giant Google seems to have fixed that biggest problem and found a new solution for it.

Contents show
Google’s New Project Has Finally Fixed Android’s Biggest Trouble
But then how can Google solve the problem?
The steps and barriers in the Android world
But what is Project Treble?
Will the new approach solve all upgrade issues?

It’s been almost 9 years since the tech giant Google released the first version of Android, but since then there has been a growing problem. Android, as an open source operating system, is used on millions of devices, yet a large percentage of these devices are not upgraded, or those that are, it takes forever for device manufacturers to roll out updates.

But then how can Google solve the problem?

The problem itself is not in Android or even on brands such as Samsung, Sony, HTC, Huawei, LG, and others, which take too long to launch the updates to the market. Of course, currently, if you want to have the latest versions you can buy a Nexus or Pixel (Google devices). It’s worse, it’s true.

In recent times brands have been more committed and quickly release security patches (fixes to problems) for equipment. It has worked very well, this commitment, however, the truth is that users do not want to be 4, 5 or even half a year to have a new version of Android and this is what happens now, even with the commitment of the brands.

The steps and barriers in the Android world

We may think that it is because of the low brands or the complexity of the system, but in fact, there is a series of steps that are still complex or time-consuming and that cause “entropy” in Android, when in other systems is immediate.

Let’s take a look at the steps from launching an Android version to getting to the devices. 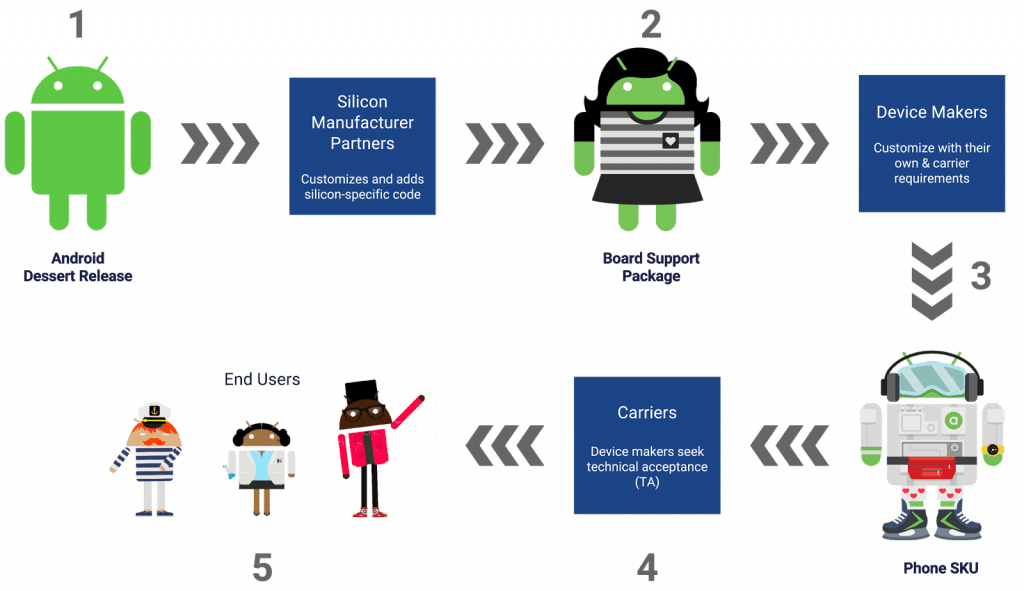 The solution is called Project Treble and is the great asset that is expected to be presented on May 17 in the Google I/O 2017 event.

But what is Project Treble?

In more simplistic terms, for us to understand how Google is thinking, let’s take as an example the Compatibility Test Suite (CTS), which has been implemented in Android applications. So with CTS, developers create applications ready to run on millions of devices, with no need to make tuning for each.

Inspired by this mechanism, Google created Project Treble. This project intends to do what the CTS does for the applications. The central concept is to separate the vendor implementation – the lower-level specific software, written largely by hardware manufacturers – from the Android operating system framework. 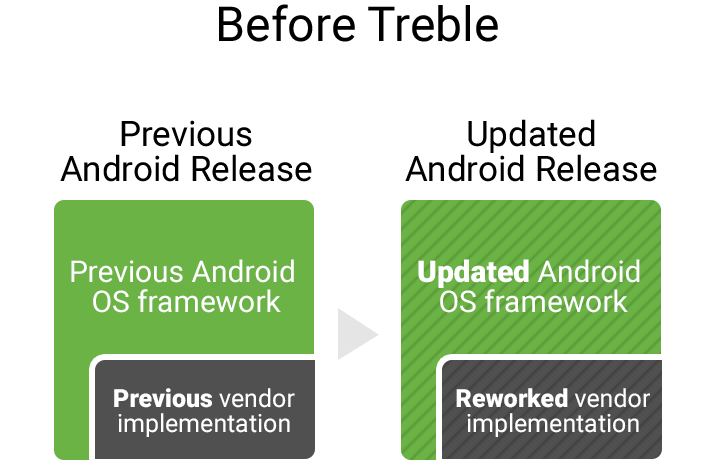 With the stable manufacturer interface, which provides access to specific pieces of Android hardware, device manufacturers may choose to deliver a new version of Android to consumers by simply upgrading the structure of the Android operating system without requiring any additional work from manufacturers of components. 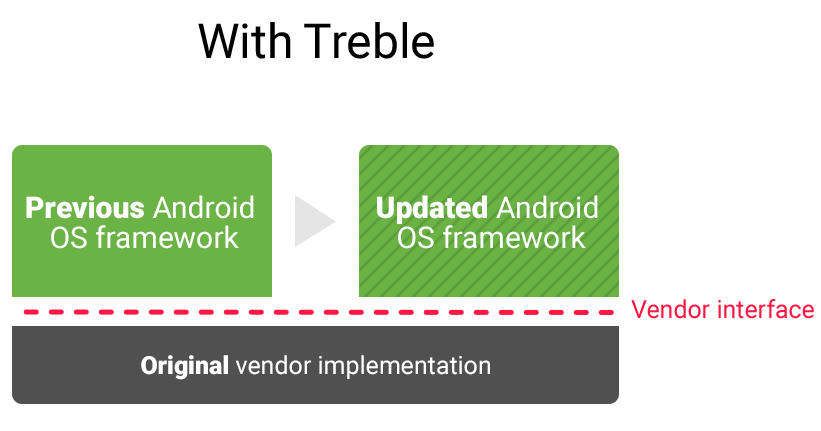 The Treble Project will reach all the devices that will be launched with Android O, being this new architecture already present in the version Developer Preview. The benefits of this approach are evident as seen in the images above. If before we needed the component vendors recompile the versions for each component, with this the new approach such is no longer necessary.

Will the new approach solve all upgrade issues?

This new approach is an excellent bet by Google and will certainly accelerate the upgrade processes, but not as much as would be expected. Manufacturers will still need to put their own features, tools, and applications on the clean version of Android. This process will take time. In addition, we will still have many telecom operators who will still want to place their own applications above the manufacturer’s build.

Google is, however, working with equipment and component manufacturers to, when making a specific change, such as for a network in a particular country, and to place the codes in the AOSP (Android Open Source Project) in order to Who do not need to rewrite new patches for every Android release.

For more information and to keep track of what Google has to show developers, there are more details on the company’s blog to help you understand the steps to be taken in the near future.