Recently, a new Android software update was announced by Google. The new Android 12L  got several new features that help large-screen devices to take advantage of its bigger displays.

With the new Android 12L update, Google rolled out a new March security patch update with new features. However, the update didn’t go well with all the users, as many of the old Pixel Device users were unable to make contactless transactions with Google Pay.

After the update of the security patch, users can no longer make NFC transactions. And this issue wasn’t solved instantly, as it could take a full day. A device shows a notification saying, “Your Phone doesn’t meet software standards.” It is a certification status that can also be seen in Play Store settings. 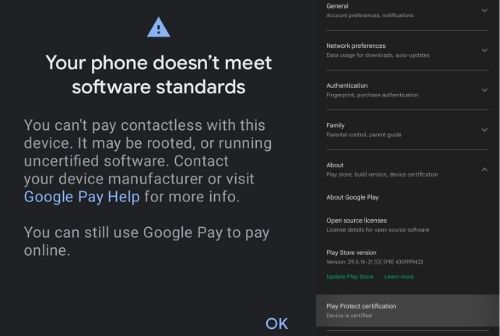 According to the reports by 9to5Google, random Pixel users updated their device to the latest Android 12L and got this issue. The users posted on Reddit saying the issue is on Google Pixel 4, Pixel 4A, 4A 5G, and Pixel 5.

When the NFC transaction feature is not working, it shows,  “You can’t pay contactless with this device. It may be rooted or running uncertified software. Contact your device manufacturer or visit Google Pay Help for more info. You can still use Google Pay to pay online.”

However, the issue is affecting the users who downloaded the stable builds of the OS. You can check out your device before you get the issue.

The latest updates say that the issue has been fixed by Google.

A Google spokesperson said in a statement,