There were rumors about Google working on its own smartwatch powered by its WearOS. However, now it looks like the rumors are turning into reality soon. The Google Pixel smartwatch has been leaked ahead of launch and there no official details out yet. 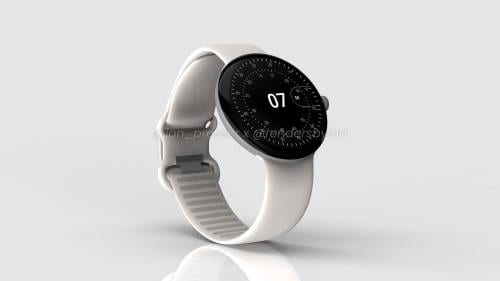 A tipster named Jon Prosser has shared the series of the Google Pixel Watch which has a codename “Rohan”. The images of the watch that are leaked show the design and confirm that the smartwatch will support WearOS. Apart from sharing images, the tipster has also provided a possible release date, which might be in October, if the leaked news is true.

According to tipster Jon Prosser, the upcoming smartwatch will have a bezel-less design. By seeing the pictures, it looks like the watch will have a circular case design (Round shape). One noticeable thing in the watch is the Physical crown, which is seen in the Analog watches.

It looks like Google has taken clues from Apple and Samsung. There is one thing similar to Samsung Galaxy Watch Active 2, the curve that wraps around the watch case. And the Silicone or soft rubber straps are like Apple Watch 6.

However, by looking at the design we can say that the Google Pixel watch will be lightweight. From the pictures, we can guess that the watch case is slimmer than other smartwatches. Not many details about the watch are out yet, except the support for WearOS.

As per the leaked details, the watch will have a power button on the right edge. There will be two colors of watch Black and Silver case and 20 different straps will be there. As it is a Pixel watch, it will integrate with other Google apps and services.

However, as all these details are leaked by a tipster Prosser so we can’t say all the details are true. We need to wait for the official confirmation. Even the release date can be different, we don’t know it will be launching on this date, or might be earlier or can be delayed. But there are other rumors that say, the watch could release with Google Pixel 6.

So, what are your thoughts on Google Smartwatch? Do share it with us.