The upcoming Google Pixel Watch has been found at a restaurant in the US, and the real-world images have surfaced online. These pictures show the design and a complete look at the watch for the first time.

According to Android Central, one of the publication’s readers found the Pixel Watch in a restaurant, took photos, and sent it. However, not many details about the specifications of the watch are revealed.

Real Images Of Pixel Watch Leaked In The US 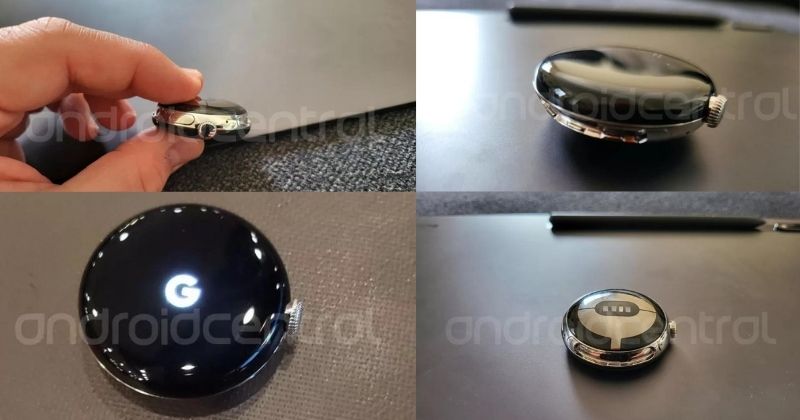 The latest images of the device are much similar to the previously leaked renders, like the round watch face and rotating crown.

In the photos, we can see a physical crown between two buttons on the side. These buttons might be used to turn the watch on or off, return to the home screen, or shortcut to pull up apps.

The small hole could be a microphone or an altimeter sensor to track stair climbing. And the four pins on the side might be used for testing purposes and might not come in the final model. Underside, there is a black frame with an oval-shaped health-tracking sensor in the center.

However, it is not known how the user interface of the watch might look. When the watch was turned on, it showed a white Google logo.

As per the reports by Android Central, the watch might be charged within its case, just like Apple Watch.

It isn’t confirmed, but the source said that this watch can be a testing model for the Internal Pixel team.

The images which are shown suggest that this is a Pixel Watch or a copy of it. It also looks like there is a button below the crown, and there may be another button above the crown.

According to previous rumors, the Pixel watch has two buttons; from which one of them is dedicated to voice assistant. The bottom of the watch looks metallic but feels like it’s coated with glass.