Previously we had shared some news regarding the launch of Pixel 2. The launch of Pixel 2 has come from within the company itself. But, today we will share something more interesting things about Pixel XL 2 which is spotted on GeekBench.

The tech giant Google has already confirmed that for this year we will have new Pixel phones possibly in the form of a normal model and a larger screen, in the same line as the current Pixel devices.

While rumors have already surfaced about features, a recent benchmark of a supposed Google Pixel XL 2 has offered us many more clues than we can see when these devices are introduced in the last quarter of the year.

At the end of the year, we will not only have devices like the Galaxy Note 8 or iPhone 8 but can expect the new Google Pixel. The larger version, the XL, could have already made its appearance in the Geekbench benchmark showing some features like its particular aspect of the screen and its camera.

According to the mentioned benchmark, the screen of the Google Pixel XL 2 will bet on the 5.6 inches at 2560×1312 resolution with a 17.5:9 aspect ratio, something more particular than usual in the sector. This would make us look at a narrower phone with thinner frames. 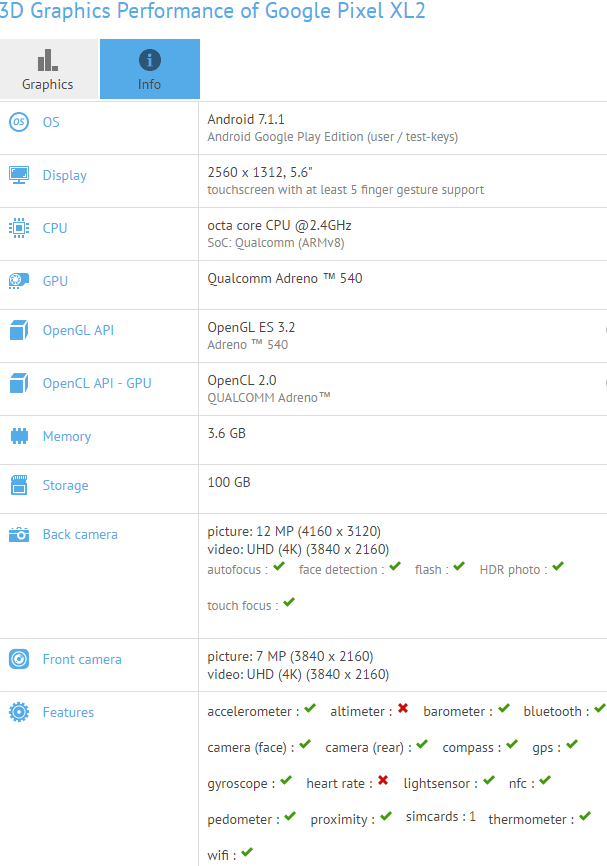 The rest of the features of the Google Pixel XL 2 would include 4GB of RAM, 128GB of storage, Snapdragon 835 8-core processor which will be clocked at 2.4GHz accompanied by an Adreno 540 GPU.

The curious thing about the benchmark is that it seems to indicate that the Google Pixel XL 2 will not have the dual camera, and instead would have a 12MP rear camera with 4K recording and native HDR photos, and an 8MP front with UltraHD recording. However, there are still some months left to know the final specifications of the phone.

So, what do you think about this new Pixel XL 2? Simply share your views and thoughts in the comment section below.