At CES, Google announced a few new features for Chrome OS. The company is working on a new feature that will be added to Nearby Share. This feature will allow users to share files with themselves.

Google is working on the “Self Share” feature for Nearby Shares; it will let users send files to themselves without using an email or cloud drives.

The new feature is expected to reach Chrome OS, which got the nearby share functionality late last year. 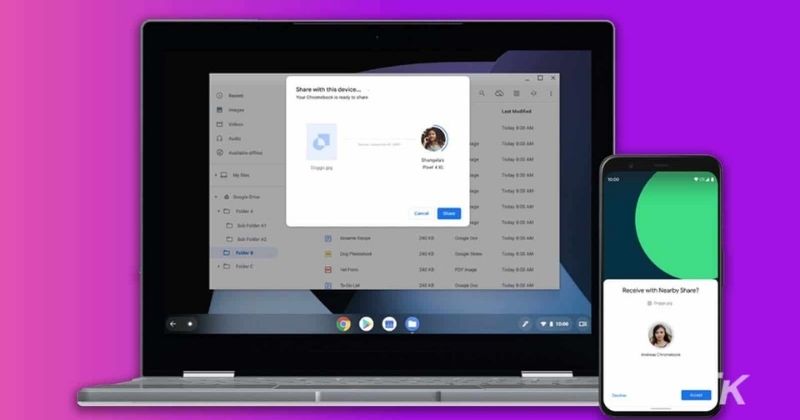 The feature was spotted in Chromium Gerrit by ChromeStory. According to the reports, the Self Share feature will work via Bluetooth or Wifi to transfer the data to Chrome OS or on Android devices.

Google is bringing changes to Nearby Share to share files with the users themselves. Once the feature is available, there will be a new option added to Nearby Share many “Send to Your Devices.”

Moreover, reports are saying the feature will be available on Chrome OS as well as on other devices and platforms.

The Self Share feature in Nearby Share might work along with the upcoming Camera Roll feature in Phone Hub on Chrome OS devices. This will let you share media from your phone to Chromebook and vice-versa.

The new feature in Nearby Share might appear in the upcoming Chrome OS canary update. However, it might take a few months to roll out the stable build update. As before rolling out to the public, Google needs to test the feature and find out bugs.

Google launched Nearby Share for Android in 2020 as a competitor to AirDrop. The feature is now expanded to Windows PCs.