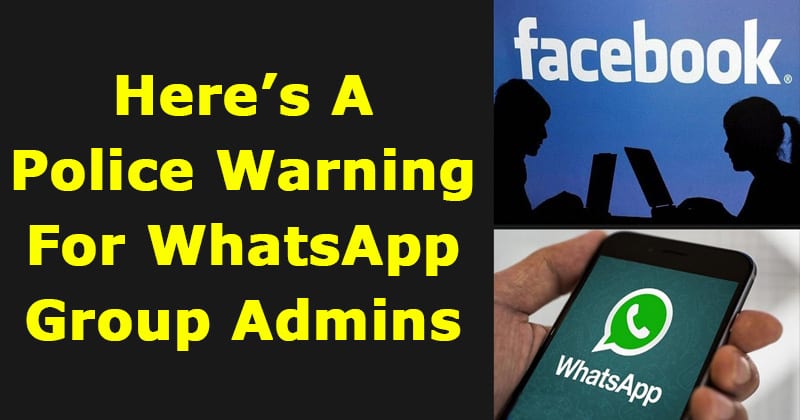 If you are using WhatsApp and manage several groups, you need to read this news. Recently, the police in the Parbhani district of Maharashtra issued a warning to the ‘admins’ of WhatsApp groups that they should ensure that no objectionable content is circulated to the group.

Group Administrators are the one who has full control over the WhatsApp groups, they can see and manage the contents that the group members share. Multiple persons can also be admins for one group.

Parbhani Sub Divisional Police Office, Sanjay Pardeshi said, “We have issued a letter to all police stations, asking them to summon WhatsApp group admins in their areas in person, and tell them that they should avoid such content in the group”

The letter sent by the authorities to police stations in the district says WhatsApp groups should not have any disrespectful content, including text, pictures, audio or video clips about historical or iconic figures, places of worship, or anything that may hurt religious sentiments.

Not only these, but Sanjay Pardeshi also said that if any Group admin finds such a post in the WhatsApp group, it should be immediately reported to the police. Dilip Zalke, the district superintendent of Police Dilip Zalke, said that police took this step after incidents of defamatory content going viral through WhatsApp groups were reported.

He also said, “Even to forward such a content is a crime”. If police find any objectionable content in WhatsApp groups, offenses under the Information Technology Act and IPC will be registered.