We all know very well that the well-known Chinese smartphone manufacturer Huawei recently, announced its top of the ranges, the P20 and P20 Pro. However, now according to the latest reports, Huawei P20 Pro managed to beat Galaxy S9, iPhone X & Pixel 2 in the DxOMark test.

The well-known Chinese smartphone manufacturer Huawei recently, announced its top of the ranges, the P20 and P20 Pro with the best processor from the Chinese manufacturer, top notched screens and other news, but the focus is photography: the P20 Pro has the triple camera, with a 40-megapixel sensor. And it overtook all the smartphones in the market by a large advantage.

In the DxOMark, which analyzes the cameras of smartphones in depth, the P20 Pro reached 109 points. It hit the Galaxy S9+ (99 points), former leader of the rankings, Google Pixel 2 (98 points) and iPhone X (97 points). The Huawei P20, which features a dual camera and a 20-megapixel sensor, also performed well in the ratings with 102 points. 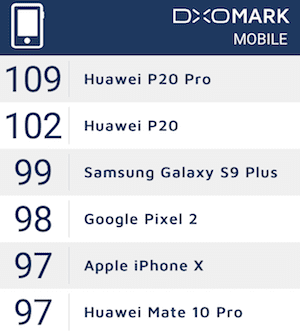 The DxOMark says that “the large sensor in the main camera combined with the black and white sensor allows excellent performance in low illumination and category-leading dynamic range; the 80mm telephoto lens in combination with the high-resolution monochrome chip offers the best zoom performance we’ve seen on a smartphone so far. The monochrome chip is also used to help generate excellent bokeh simulation in the P20 Pro.”

The camera is good at practically everything, according to DxOMark: the noise is well controlled; autofocus is fast and accurate; the dynamic range is wide especially with plenty of light, and the bokeh effect (background blur) is excellent. The few criticisms were due to artifacts in scenes with HDR; exposure instabilities and white balance when zoom is activated; and orange or pink markings under strong light and indoors.

There is no price or release date yet for the Huawei P20 Pro, but it may be difficult to get one if you are staying in the US, yes, it will not be released in the United States as the company faces problems with the US government.