The new processors of Intel Kaby Lake are being the subject of recurring conversation this summer. The American company recently introduced the seventh generation of the Intel Core, and with the launch of the new Core i3, Core i5, and Core i7 the overclocking enthusiasts without wasting time started testing the limits of physics to take the processors to the extreme level. After the feat of the Intel Core i9, now it has been the turn to Core i7.

Based on a Gigabyte motherboard, an overclocking team has managed to bring the power of the Intel Core i7-7740K up to the 7.5 GHz clock speed. It is important to keep in mind that we are talking about a processor that, under its factory configuration, does not exceed the 4.5 GHz clock speed even with the Turbo Boost option. To achieve this figure of 7.5 GHz, among other things it has been necessary to use liquid helium cooling, with temperatures of -250 ° Celsius.

With the Australian community of TeamAU, this strange team of overclockers has managed to beat all the records recorded till to the date in such popular benchmarking programs as 3DMark03, 3DMark06 or Aquamark, although for this they have needed to make use of the more extreme cooling techniques. This overclocking team is made up of names such as HiCookie, Sofos or Dinos22. 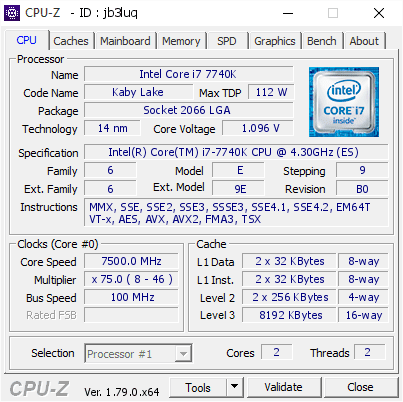 As explained in detail in KitGuru.net, for this record it has been used a processor Intel Core i7-7740K installed on a motherboard Gigabyte x299 AORUS and supported by 16GB memory (DDR4, Corsair Vengeance) and a source Power Supply Corsair AX1500i. The processor had two of its four cores deactivated, and raising the multiplier up to a factor of x75 this is how they have managed to bring the clock speed of up to 7.5 GHz.

In any case, we should not forget that we are before a simple sample of what a processor is able to obtain if the most extreme conditions of the planet are applied to it. However, these tests simply reveal the true power of a processor in everyday use, so all these figures that are appearing these days on the new Intel Core i7 and Intel Core i9 should be considered precisely as simple figures.